iOS and Android users may never text with ease, but in-app chat can help level the playing field for everyone. 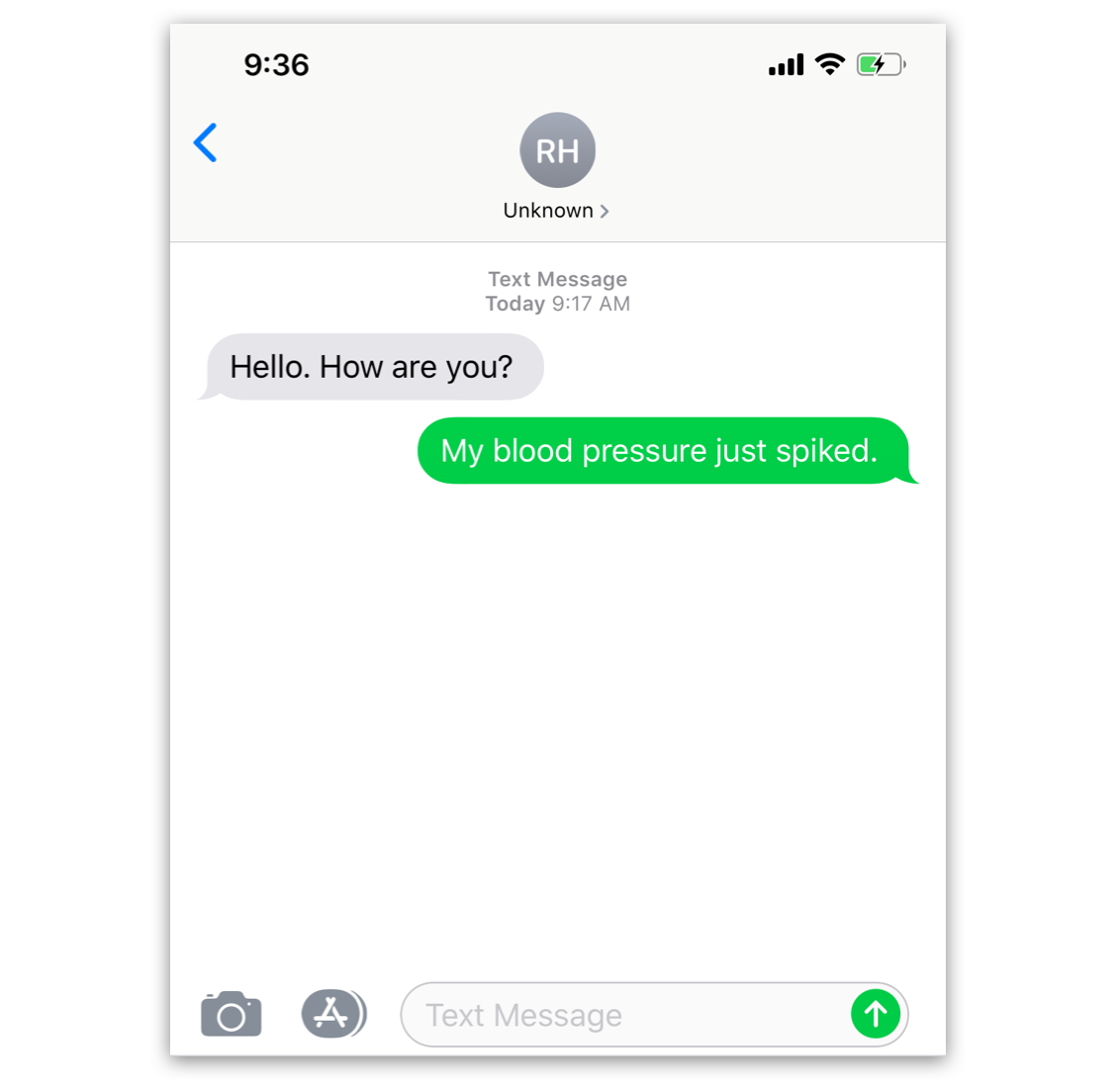 For iPhone users, few interactions on the device elicit such stress — or outright torment — as does the subjugation of an SMS (Short Message Service) text rendered in green. And inboxes are littered with them: political text messages have flooded mobile phones in the last few months, all of which are sent via SMS. So, too, are spam hits, two-factor authentication codes, credit card receipts, appointment confirmations, and many more sterile green messages sent to iPhones absent any point of human contact. And so, to no fault of their own, people sending text messages to iOS users from Android devices — which exclusively deploys SMS — are reflexively categorized as unwelcome communication. Both parties are poorer for the experience.

Since the iPhone launched, in 2007, iMessage (debut: Oct. 2011) may just be the most delightful and influential product Apple has created. And the reasons are many; few, after all, can resist typing indicators and read receipts while seamlessly exchanging pictures, videos, and documents alongside emoji reactions. Today, iMessage is available on almost all Apple devices, platform agnosticism its defining characteristic. Users can access iMessage on mobile, desktop, tablets, and smartwatches, all with the backing of end-to-end encryption. But beyond ubiquity and the individual dopamine hits, the sum of iMessage’s parts has coalesced into an experience where just a single blue-shaded chat bubble stirs within us a much deeper emotion: trust. And this trust has less to do with data security (though the service does score well by most measures) than it does the confirmation that there is an alive, sentient human being on the other end of the line, whereas in so many cases with SMS, there is not, torpedoing any sense of confidence our messages are safe, secure, and being delivered even during those times we’re communicating with a known recipient. (To Android’s credit, incoming messages to its devices appear similarly regardless of the opposing operating system, but the presentation of reactions and attachments can still be awkward.)

We’re not here to synchronize the two sides. iOS and Android messaging will likely only drift further apart in the coming years — Google continues to refine its Rich Communication Services (RCS) messaging for Android and Apple is, well, Apple, meaning iMessage isn’t going anywhere. But if we take a step back and assess this seemingly eternal struggle with some distance, we’re reminded of the significant weight in-app chat messaging holds. As we wrote earlier this year, in-app chat messaging can be defined as “private, bidirectional chat and direct messaging between two or more people within a software application,” occurring across a variety of native applications serving various marketplaces. Throughout the last decade, the usual suspects have helped pioneer the practice: Facebook Messenger, Instagram, WhatsApp, and Snapchat are all examples of in-app chat message services that have leveled the playing field and provided solid, uniform UI/UX for everyone. Indeed, no matter the device, users on these apps communicate without friction; how one message functions and looks, all messages function and look, and most iOS users would rather communicate with these various platforms than interact with a single green SMS. 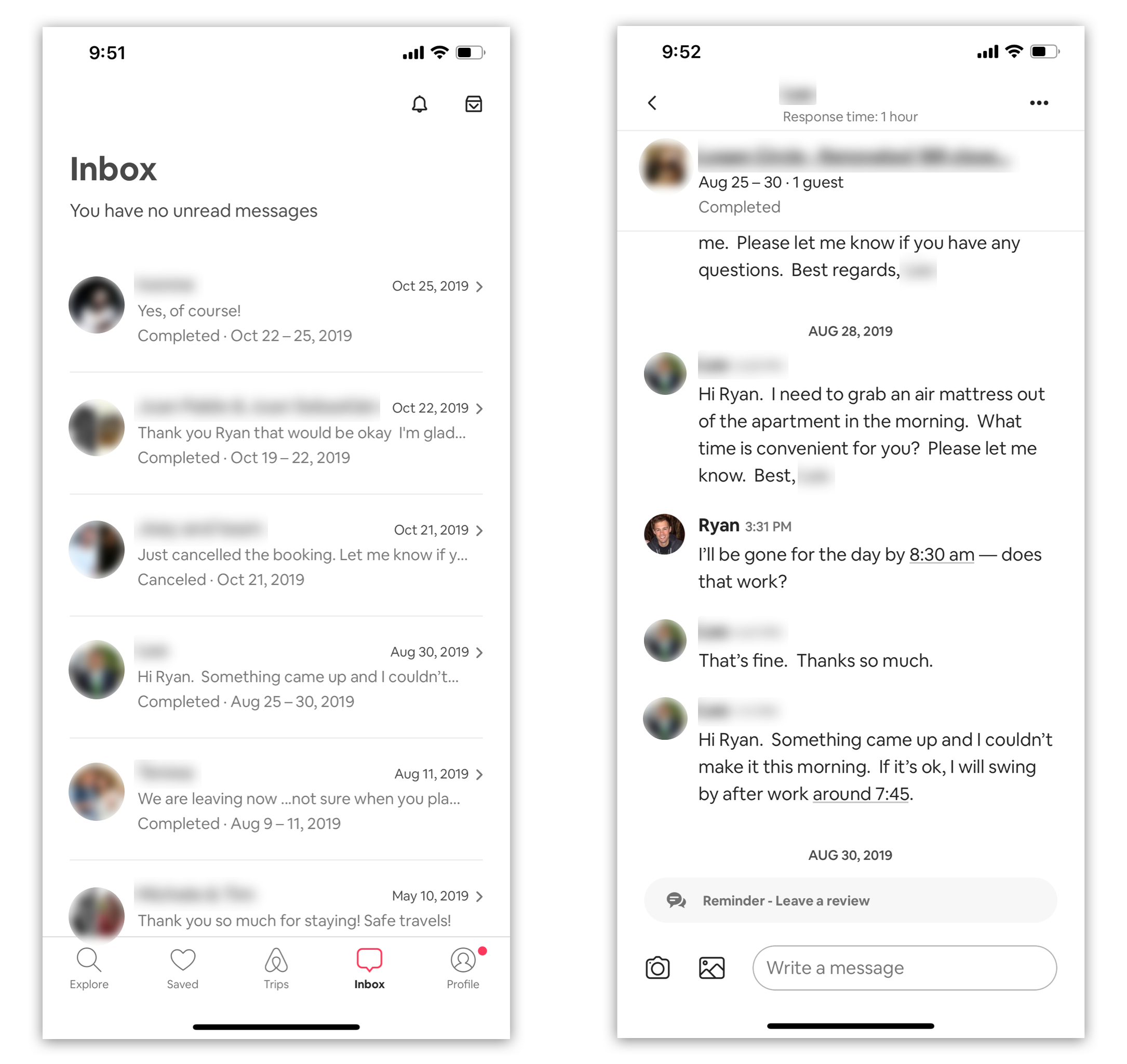 Who gets it right

Up and coming platforms would do well to follow the leads of the names mentioned, and many have. OfferUp, a platform for people to sell and buy used items, manages a practical in-app messaging experience where all communication between parties happens on the platform and the experience is mirrored no matter the device. Thumbtack, an app that connects users with home-building professionals, also gets this experience right by providing seamless communication between parties on its app, including timestamps, image-sharing, document attachments, and more. Airbnb (pictured above) also earns high marks, connecting homeowners with renters on a platform that provides the same, sharp experience on desktop and mobile versions. Dating apps, too, stand as excellent examples of in-app messaging — communication happens only on the app or until both parties decide to migrate the conversation elsewhere. Specifically, most of these apps include at least one if not all of the following: 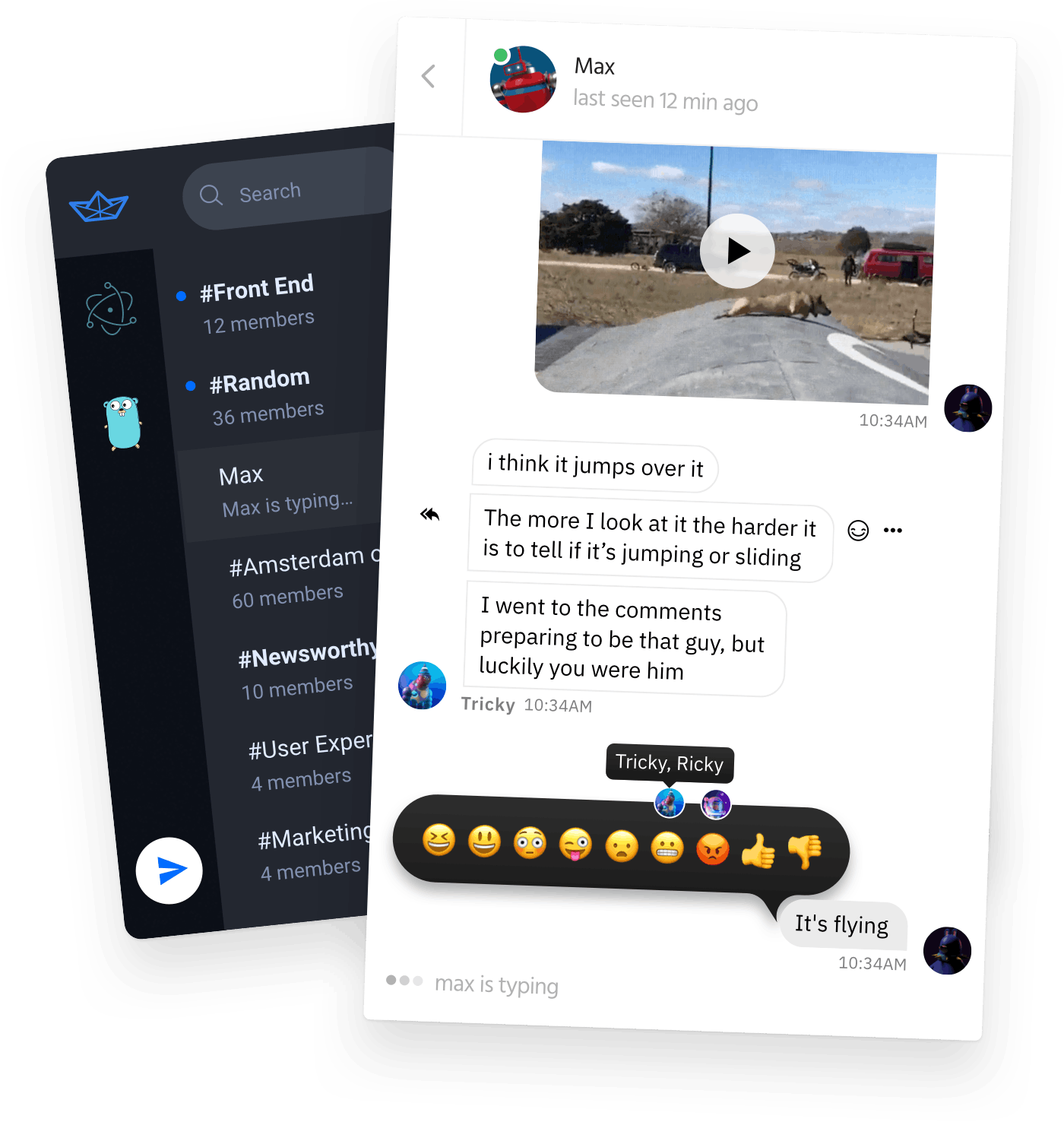 The commonality among companies that successfully make use of in-app chat embodies the iMessage experience built on trust, assuring users that their messages will be received, read, and, in most cases, interacted with by another human, thus, causing a positive feedback loop that encourages engagement while keeping the experience organized and separated from personal text messages. More to that point: with in-app chat, users are able to compartmentalize their affairs by keeping, say, communication with plumbers and electricians in one place and weekend getaway reservations in another, and certainly without the exchanging of direct contact information. And users can feel comfortable knowing their conversations are ostensibly taking place in public, supplied by third parties that have verified accounts and can help resolve disputes. Aggressive or inappropriate language, for example, can be reported, as can breaches of contract, offering a blanket of security not found in offline communication.

Still, this way of doing business remains too much the exception. Many companies continue to require out-of-app communication, exposing their customers to a disjointed and unnerving experience. Confirmation codes aside, receiving text messages to one’s mobile device remains a deeply personal interaction, and even those well-meaning can aggravate and disrupt and turn an otherwise pleasant experience sour. It also makes little business sense to eschew in-app chat: why needlessly push users away from the platform? After all, higher app engagement leads to lower abandonment rates and churn. Even for apps that aren’t frequently opened — no one, hopefully, requires a plumber every week — when users do need to solicit their services, an old adage applies: people won’t remember what you said, but they’ll remember how you made them feel. And a single negative experience, such as forced communication via SMS texts, will stick in the minds of users forever.

This starts by building apps that host communication and messaging capabilities regardless of device. And with it, opportunities abound. Companies can customize their apps’ features, including document and image sharing, link previews, all running parallel with read receipts and typing indicators. Meanwhile, communication is housed in one easy-to-remember place, providing a pleasant experience buoyed by safety and security. This, then, sets the stage for large-scale growth, building blocks that allow apps to expand and reach people around the world. When in-app chat is properly implemented it allows time and space for more software features to flourish and complement the overall experience. The green texts don’t stand a chance.