Stream powers feeds for over 300+ million end users. With all of those users relying on our infrastructure, we’re very good about testing everything that gets pushed into production. Our primary codebase is written in Go, with some remaining bits of Python. Our recent showcase application, Winds 2.0, is built with Node.js and we quickly learned that our usual testing methods in Go and Python didn’t quite fit. Furthermore, creating a proper test suite requires a bit of upfront work in Node.js as the frameworks we are using don’t offer any type of built-in test functionality. Setting up a good test framework can be tricky regardless of what language you’re using. In this post, we’ll uncover the hard parts of testing with Node.js, the various tooling we decided to utilize in Winds 2.0, and point you in the right direction for when it comes time for you to write your next set of tests.

Why Testing is so Important

We’ve all pushed a bad commit to production and faced the consequences. It’s not a fun thing to have happen. Writing a solid test suite is not only a good sanity check, but it allows you to completely refactor code and feel confident that your codebase is still functional. This is especially important if you’ve just launched. If you’re working with a team, it’s extremely important that you have test coverage. Without it, it’s nearly impossible for other developers on the team to know if their contributions will result in a breaking change (ouch). Writing tests also encourage you and your teammates to split up code into smaller pieces. This makes it much easier to understand your code, and fix bugs along the way. The productivity gains are even bigger, due to the fact that you catch bugs early on. Finally, without tests, your codebase might as well be a house of cards. There is simply zero certainty that your code is stable.

In my opinion, most of the testing problems we ran into with Winds were specific to Node.js. The ecosystem is always growing. For example, if you are on macOS and run “brew upgrade” (with homebrew installed), your chances of seeing a new version of Node.js are quite high. With Node.js moving quickly and libraries following close behind, keeping up to date with the latest libraries is difficult. Below are a few pain points that immediately come to mind:

The situations listed above are not ideal and it’s something that the Node.js community needs to address sooner rather than later. If other languages have figured it out, I think it’s time for Node.js, a widely adopted language, to figure it out as well.

Writing Your Own Test Runner

So... you’re probably wondering what a test runner is. To be honest, it’s not that complicated. A test runner is the highest component in the test suite. It allows for you to specify global configurations and environments, as well as import fixtures. One would assume this would be simple and easy to do... Right? Not so fast... What we learned is that, although there is a solid number of test frameworks out there, not a single one for Node.js provides a unified way to construct your test runner. Sadly, it’s up to the developer to do so. Here’s a quick breakdown of the requirements for a test runner:

With Winds, we chose to use Mocha as our test runner. Mocha provides an easy and programmatic way to run tests on an ES6 codebase via command-line tools (integrated with Babel). To kick off the tests, we register the Babel module loader ourselves. This provides us with finer grain greater control over which modules are imported before Babel overrides Node.js module loading process, giving us the opportunity to mock modules before any tests are run. Additionally, we also use Mocha's test runner feature to pre-assign HTTP handlers to specific requests. We do this because the normal initialization code is not run during tests (server interactions are mocked by the Chai HTTP plugin) and run some safety check to ensure we are not connecting to production databases. While this isn't part of the test runner, having a fixture loader is an important part of our test suite. We examined existing solutions; however, we settled on writing our own helper so that it was tailored to our requirements. With our solution, we can load fixtures with complex data-dependencies by following an easy ad-hoc convention when generating or writing fixtures by hand.

Although the process was cumbersome, we were able to find the right balance of tools and frameworks to make proper testing become a reality for our backend API. Here’s what we chose to go with:

Mocha, described as a “feature-rich JavaScript test framework running on Node.js”, was our immediate choice of tooling for the job. With well over 15k stars, many backers, sponsors, and contributors, we knew it was the right framework for the job.

Next up was our assertion library. We chose to go with the traditional approach, which is what works best with Mocha – Chai. Chai is a BDD and TDD assertion library for Node.js. With a simple API, Chai was easy to integrate into our application and allowed for us to easily assert what we should expect to be returned from the Winds API. Best of all, writing tests feel natural with Chai. Here’s a short example:

With the ability to work with any unit testing framework, Sinon was our first choice for a mocking library. Again, a super clean integration with minimal setup, Sinon turns mocking requests into a simple and easy process. Their website has an extremely friendly user experience and offers up easy steps to integrate Sinon with your test suite.

For all external HTTP requests, we use nock, a robust HTTP mocking library that really comes in handy when you have to communicate with a third party API (such as Stream’s REST API). There’s not much to say about this little library aside from the fact that it is awesome at what it does, and that’s why we like it. Here’s a quick example of us calling our personalization engine for Stream:

The library mock-require allows dependencies on external code. In a single line of code, you can replace a module and mock-require will step in when some code attempts to import that module. It's a small and minimalistic, but robust library, and we're big fans.

Istanbul is a JavaScript code coverage tool that computes statement, line, function and branch coverage with module loader hooks to transparently add coverage when running tests. Although we have similar functionality with CodeCov (see next section), this is a nice tool to have when running tests locally.

With all of the libraries, including the test runner mentioned above, let’s have a look at what a full test looks like (you can have a look at our entire test suite here):

There are a lot of continuous integration services available, but we like to use Travis CI because they love the open-source environment just as much as we do. Given that Winds is open-source, it made for a perfect fit. Our integration is rather simple – we have a .travis.yml file that sets up the environment and kicks off our tests via a simple npm command. The coverage reports back to GitHub, where we have a clear picture of whether or not our latest codebase or PR passes our tests. The GitHub integration is great, as it is visible without us having to go to Travis CI to look at the results. Below is a screenshot of GitHub when viewing the PR (after tests):

In addition to Travis CI, we use a tool called CodeCov. CodeCov is similar to Istanbul, however, it’s a visualization tool that allows us to easily see code coverage, files changed, lines modified, and all sorts of other goodies. Though visualizing this data is possible without CodeCov, it’s nice to have everything in one spot. 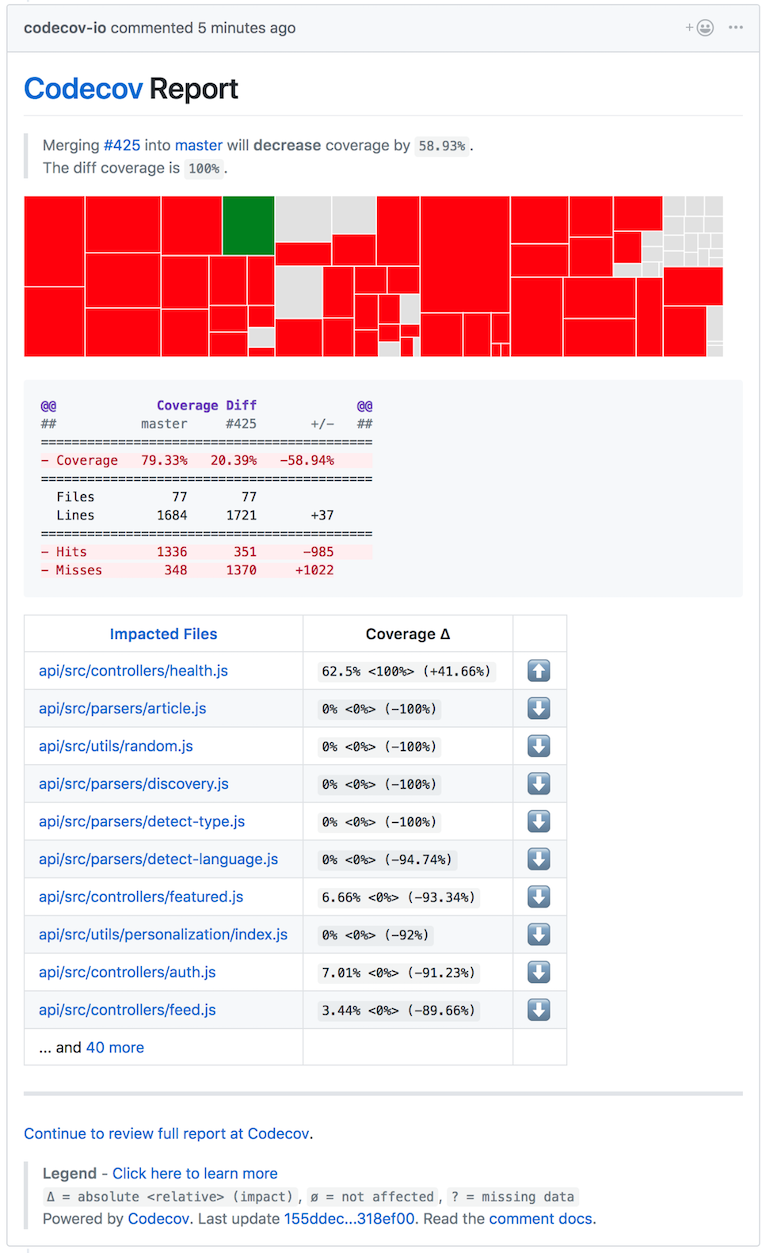 No Easy Way to Create Fixtures 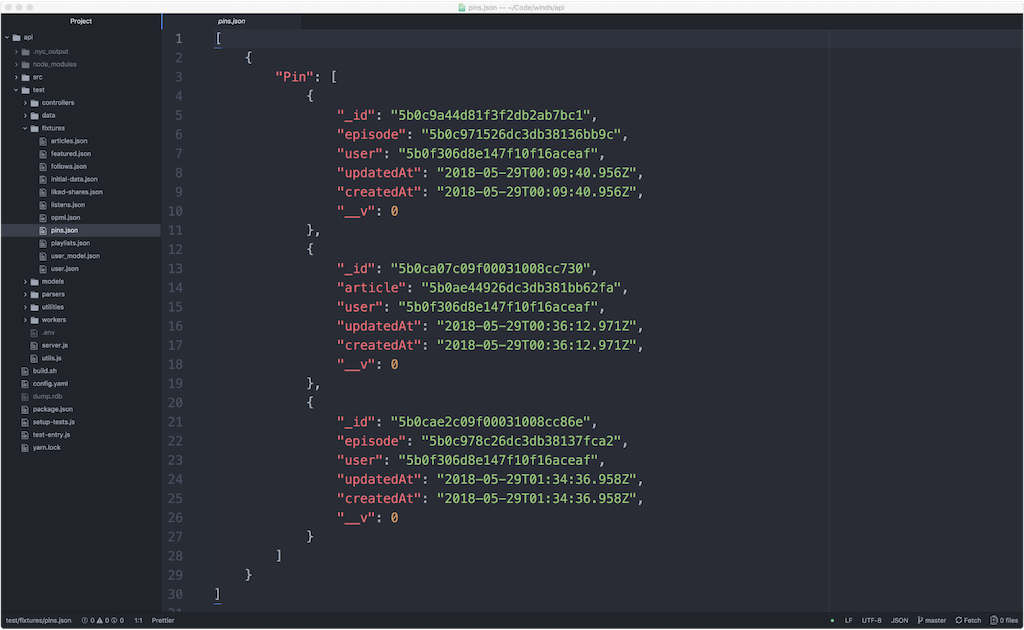 To support a broader variety of node versions and have access to latest additions to Javascript standard, we are using Babel to transpile our ES6 codebase to ES5. Node.js module system is based on the CommonJS standard whereas the ES6 module system has different semantics. Babel emulates ES6 module semantics on top of the Node.js module system, but because we are interfering with module loading by using mock-require, we are embarking on a journey through weird module loading corner cases, which seem unintuitive and can lead to multiple independent versions of the module imported and initialized and used throughout the codebase. This complicates mocking and global state management during testing.

Testing Node.js applications is a complicated process because the ecosystem is always evolving. It’s important to stay on top of the latest and greatest tools so you don’t fall behind. There are so many outlets for JavaScript related news these days that it’s hard to keep up to date with all of them. Following email newsletters such as JavaScript Weekly and Node Weekly is a good start. Beyond that, joining a subreddit such as /r/node is a great idea. If you like to stay on top of the latest trends, State of JS does a great job at helping developers visualize trends in the testing world. Lastly, here are a couple of my favorite blogs where articles often popup:

Think I missed something important? Let me know in the comments, or on Twitter – @NickParsons.