Is your chat going global? Worry less about the language barrier when you pair Amazon Translate with our real-time messaging API.

When powering a chat product in a global environment, multilingual support should be top-of-mind. Doing so allows you to ensure that the communication barrier between yourself and the user on the other end is not broken.

Here is a preview of what you will build at the end of this tutorial:

You can also find the complete code of this tutorial on GitHub.

To follow along with this tutorial, you will need to have the following:

If you have all the above ready, then let’s get started!

Set up the Client App – Create a New Vue App

Using the Vue CLI, we can easily create a new Vue app.

Accessing the URL displayed on your terminal will take you to a Vue default page.

Get Your API Keys

To start using the Stream Chat API, you need to have an API key.  Create an account here or log in if you already have an account.

Then, from your dashboard:

Finally, submit the form by clicking on the Submit button to create the app 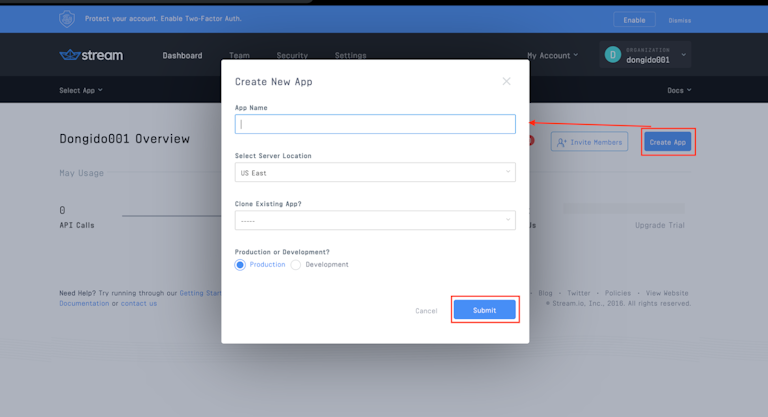 Once the app is created, you will be provided with a few options within your dashboard. Select Chat to go the Stream Chat dashboard.

Finally, create a .env file in the root directory of the project and add your Stream keys:

Remember to replace and with the correct app keys you have noted above.

Amazon Translate uses advanced machine learning technologies to provide high-quality translation on demand. We’ll use the service to translate text from one language to another.

Set up the Server

We’ll be using Node to power the server.

Create a new directory named server in the root directory of the project. Then open up a new terminal and then change your current directory to the server directory.

Next, install the following dependencies that we’ll need for the server:

The above dependencies include:

Next, create an Express app by creating a new file named app.js to the server directory and then add the following code to it:

In the code above, after importing the packages that we have installed,

To initialize the Stream Chat SDK, it requires a valid token. Create a new endpoint for creating a token.

Next, create a new endpoint for translating messages:

Also, we are setting the SouceLanguageCode to auto so that the language is automatically detected.

The result of the request is a JSON object containing the translated text.

Finally, start up the server:

If it starts successfully, you will see a message printed to the terminal  - “Node app listening on port 3000!”

For brevity’s sake, we’ll divide the app into four components:

To keep the component file as minimal as possible, I have added all the CSS of the components to a single CSS file. Create the CSS file asApp.css in the src directory of the project and then add the below styles to it:

We are using the login form to get the username of a user which we’ll use to generate a token for that user. Then the token is used for initializing the Stream Chat SDK. The username is meant to be unique for identifying users.

However, for simplicity sake, we are not doing real authentication. This is the better place for you to authenticate your users in your database if you want to limit access to only the users that you know.

Now, update the Login component with the below code:

Next, add the messages component for listing messages for a given channel:

Here, we are passing the array of messages for a given channel as props to this component. Also, using the messageDirection function, we determine the direction to place a message to either left or right depending on who sent the message.

Next, add the code that defines the InputForm component for adding new messages:

Next, add the code that defines the channels component:

In this component, we are listing the channels that we have on our app. Also, we added a form for creating a new channel.

Finally, bring all the components together by replacing the content in the src/App.vue file with the below:

In the preceding code,

So far, we have our chat interface ready but we still can’t converse because we are yet to connect the app to Stream Chat. We’ll be doing so next.

To start using the SDK, we first need to initialize it. Do so by adding the below function in the methods: {…} block in the App.vue file:

This function will be executed once the user logs in.

Next, add a function for fetching channels to the methods: {…} block of the App.vue file:

Next, add the function that is called once the user submits the login form. Add the below code to the methods: {…} block of the App.vue file:

In the function above, once a user submits the login form, this function is called immediately. Then we initialize the Stream Chat SDK. After successfully initializing the channel, we set the authenticated state to true so that the login form is hidden and the chat interface shows up. Then finally, we fetch the channels that we have created by calling the this**.getChannels()** function.

We want to keep track of active channels, that is, channels the user is currently chatting in. When a user clicks on a channel, we’ll set the activeChannel state to the channel.

Add a function for setting the active channel to the methods: {…} block of the App.vue file:

In the function above:

Next, add a function for translating messages when a user changes their language option by adding the below code to the methods: {…} block of the App.vue file:

Next, add a function for creating channels to the methods: {…} block of the App.vue file:

Finally, add a function for sending messages to the methods: {…} block of the App.vue file:

Good job! you have successfully built a multilingual chat. Now let’s test the app to see that it works:

In this tutorial, we built a multilingual chat app by combining the service of Stream Chat and Amazon Translate.

There are other useful chat features that were not added to the app, like the typing indicator, showing if a user is online or offline and so on. You can check out events that enable you to add these features here.

You can find the complete code of this tutorial on GitHub. For more information on Stream Chat, have a look here.