Conversational UI is a user interface that emulates a human to human conversation, while in reality, the human is interacting with a computer program. We’ve often seen this with the use of chatbots and voice assistants. Conversational UI that involves speaking allows you to interact with a voice assistant, while typing allows you to interact with a chatbot. They have emerged as a way to provide relevant information to consumers and service them much like they would have wanted if they were talking to a real human. We've seen chatbots used for taking lunch orders, scheduling meetings, making gift item recommendations, and much more.

We want to build applications rapidly in today’s agile world. With the use of third-party components and services, we can enrich our application and increase development speed. In the case of a conversational UI, we can use a UI component already designed for this purpose, and a chat API for real-time communication.

In this tutorial, I'm going to show you how to use the conversational UI component from Telerik’s KendoReact UI library, and the Stream Chat SDK. Together, they can be used to build a text-based conversational app which you can further extend to meet your requirement.

Setting up the React Project

Open your command-line application and run the commands below:

This sets up the React application and installs the KendoReact packages needed for the app. These packages are part of the components included in Telerik's KendoReact library. KendoReact is a commercial UI library designed and built for developing business applications with React. Every UI component in the KendoReact suite has been built from the ground-up specifically for React, and they are distributed through yarn packages.

With the React project created, we're going to add the chat component. Open App.js and import the KendoReact CSS Styles and Chat component.

The KendoReact style adds the default theme from Kendo, to make the components you use from their library have the same look and feel. The Chat component will be used to present a conversational interface.

Next, we're going to change the component to a class component and render the Chat component as follows:

This uses the Chat component from KendoReact, designed to display a conversation interface. The placeholder prop contains the text that will be displayed as a placeholder in the input area of the chat UI.

We want to get the user's name the first time they open the chat. We would do this by displaying a message asking the user to enter a name and then save it. To do this, add a constructor with the content below:

In this code, we defined the following:

Now add the addMessage function referenced in the last code snippet to the class.

This function is used as the callback function for when the user sends a message. It receives a single argument, which is an object that contains details about the triggered event, including the message text and the author.

When addMessage is called, it checks if this.user is empty. If it is, it sets the user variable to an object containing an id and name. We expect that the first message the user enters is the user’s name, according to the message prompt to enter their name. Because of that, we're taking the value of message.text as the user's name.

We want to show a message when this happens. Therefore, we simply add one saying Welcome to the chat followed by the name entered. We add this message to the list of existing chat messages through setState(), which will update the state and then display the message to the user.

When the user is set, we want every new message to be sent across the messaging channel so that users on both ends can chat in real-time. We will do this with the Stream Chat JavaScript client.

Stream Chat provides API and SDKs for building real-time chat solutions in less time. It provides one of the best (if not the best) chat API and infrastructure as a service. We're going to work with the Stream Chat JavaScript library and install it from yarn.

Open your command-line application to the project directory and run the following command:

This should create the application and show it on the dashboard. You will see the generated application KEY and SECRET, which you'll be needing later. 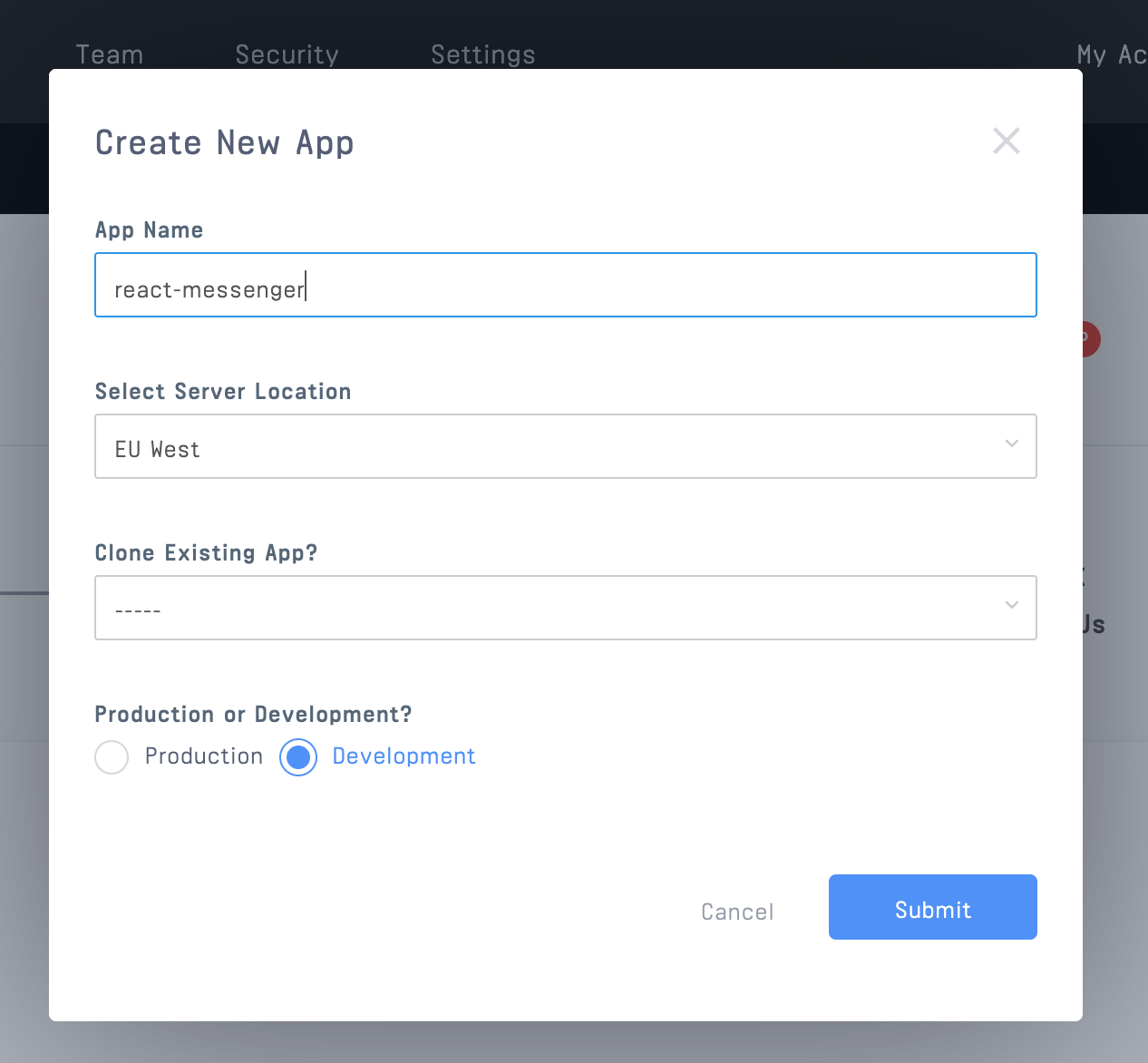 To use the chat client, we'll need to import the stream-chat module. Open App.js and add the import statement below:

Add the code below to set up the chat client and listen for new messages:

Then we call this.chatClient.setUser(this.user, streamServerInfo.token) to set the user, using the user object which contains id and name properties. After the user is set, we need to establish a bi-directional communication channel in which messages will pass through. To do that, we call this.chatClient.channel(), passing it two parameters: the channel type, and the channel identifier. Channel types are a way to enable specific features for a channel. There are some built-in channel types, and you can also create your own. The built-in channel types are:

Add the code below as the definition for the onNewMessage function:

What this code does is build a message object from the information we get from the event object, then add that message to the messages array.

If you’ve followed the instructions to add the code throughout the tutorial, your App.js should be similar to the code below:

Setting Up the Token Server

Earlier on, you added code to make an HTTP request to http://localhost:8080/v1/token to get a token that'll be used to authenticate the Stream Chat client. We will not build that token server from scratch but instead, use an already built project for that. The project is on GitHub. You can clone it by running git clone https://github.com/pmbanugo/stream-chat-boilerplate-api.git. When you’ve cloned it, follow the instructions in the README file to install the dependencies and configure it with your Stream Chat API key and secret.

You'll need to start the Node and React application separately. Open your command-line application to the directories of both projects and run yarn start. The React application should open in your default browser when the server starts. Follow the instructions on the screen to enter a user name and send messages.

The importance of Conversational UI cannot be understated; we frequently see it used in the e-commerce industry through AI-driven chatbots. In this tutorial, we built a Conversational UI using Stream Chat for real-time communication, and Telerik's KendoReact component library. Stream Chat provides the infrastructure to handle real-time messaging as well as client libraries that you can use to build a robust real-time messaging solution. To learn more about Stream Chat and everything that it has to offer, check out the docs.

You can find the code for this application on GitHub.