Keep livestream chats engaging and rewarding by properly building in thread and reply capabilities that hosts and users alike will enjoy.

Throughout its regular season, Major League Baseball selects a “game of the week” to broadcast live on YouTube. Along with streaming the game, viewers can participate in or read the accompanying chat. Slow-moving by nature, baseball produces its share of lulls, and it is those times between pitches or innings that make for good browsing of livestream chats to gain further insight into the game or to just be amused by fellow baseball fans.

But during many of these lulled occasions, the livestream chat can abruptly change gears, a flurry of messages flooding the chatbox, forcing one to scroll and play catch-up to understand or participate in the new conversation. Typically, this happens after a question is posed (often by the host), prompting banal score predictions or one-word answers. Others are replies to replies, which in theory is perhaps the goal, to spark discussion. But in practice, it only creates a messier and, frankly, boring experience that can sour the fun. This experience is not unique to sports. Many virtual music festivals, gaming streams, or news events see their chats muddied by questions or comments that distract from the free-flowing conversation about real-time events — or, in other words, the true purpose of livestream chats, those organic, in-the-moment discussions about particular happenings that serve as a collective stream of consciousness for participants.

That said, it is worth examining how livestream chats can better incorporate thread and reply features into their user experience — because, let’s face it, people seem to want it. Twitch and Periscope already include the feature, and it’s likely to be adopted and become more common as livestream chat continues to grow. Below are some design proposals and considerations when designing threads and replies for livestream chats. For the purposes of this article, Stream mocked up several screens hosting a fictional chat about a NASA rocket launch. (And though most of the designs were created for desktop views, the same layouts and principles can translate to mobile views. For more on livestream chat at large, check out our UX best practices.)

Chat boxes usually fit into a single column that accommodates no more than a dozen or so messages at one time. A tangential thought or discussion quickly dominates the portal view. A better option than overcrowding the chat box with these messages is to allow for replies and threads while simultaneously minimizing their appearance so as not to clutter the feed. Above in Stream’s mockups, users see that there is a way to create or join a thread (or add a reply), but the primary conversation remains intact and encourages continuous engagement. (Here is where optimistic UI and offline storage come into play, especially for emojis. In short, this means API calls are made after reactions are chosen which maintains chat speed and functionality even when a network is unstable.) 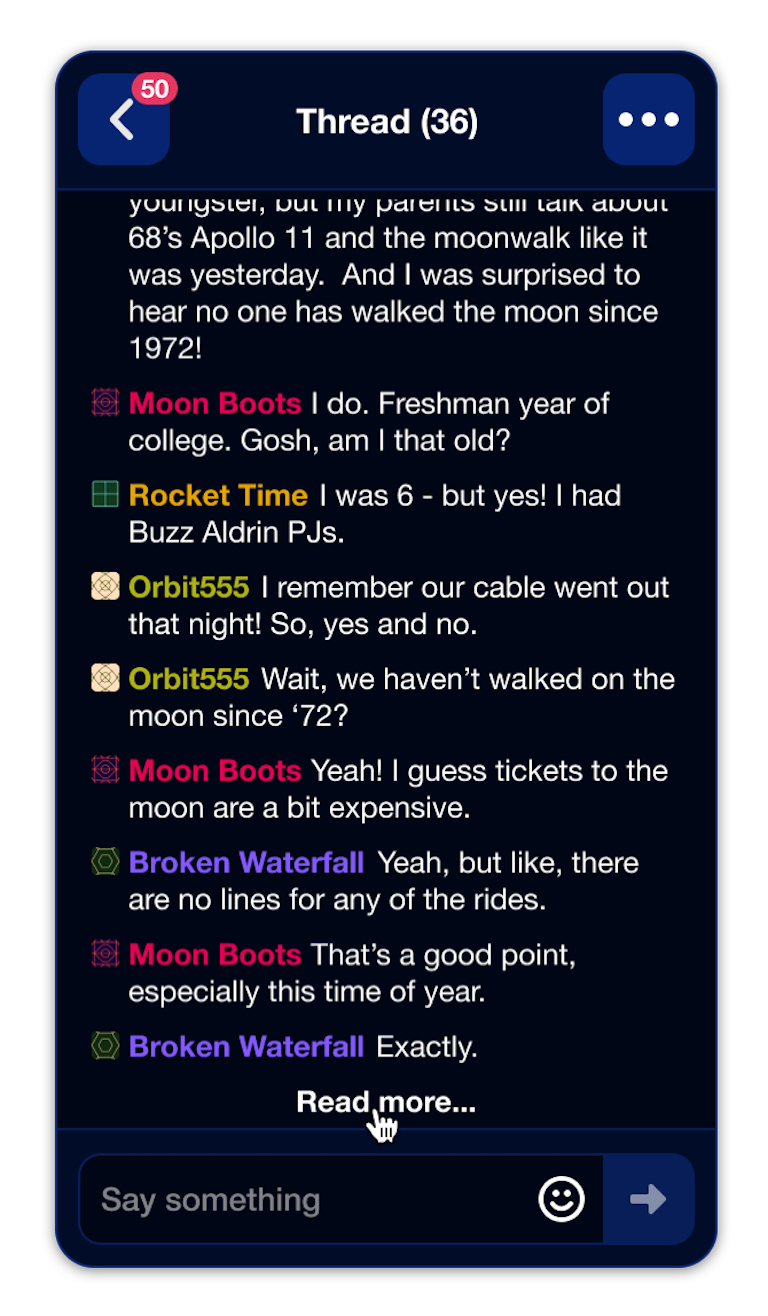 Building this thread feature allows users to engage with one another for sidebar conversations without the weight of private messages. (This, for example, this can be useful during networking conferences for virtual attendees.) Depending on space constraints, thread expansions can display side-by-side (similar to the messaging platform, Slack) or, as you can see in our mockup above, a version where the thread becomes the box’s only focal point. Here, users see how many messages are in the thread (in this example, 36) and are brought to the beginning of the chat with an option to “read more” and comment. The 'read more' can anchor wherever but likely would show the subsequent set of messages. Note that using the back arrow, users are able to return to the main conversation.

Creating a separate panel isn’t the only way to design threads. In some specific cases, dropdowns might function better. More on this below. 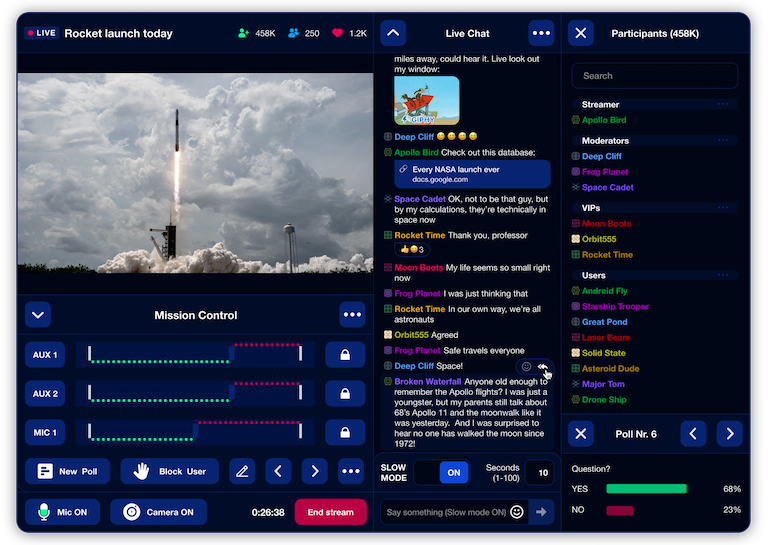 Livestreams may have a single person or group moderating the broadcast and chat (some are more engaged than others). With features like throttling, slow mode, and banning, products can benefit by giving control to the livestream hosts. And by extending this control to threads, hosts can create better experiences for themselves and their users. In practice, this may mean that only hosts can create threads. It might also give them the power to limit a thread’s reply count, deploy time-limits, or sunset them altogether.

It may also mean giving only hosts the ability to custom-build certain threads, such as multiple-choice questions or quizzes that don’t open to their chat box but rather function as overlays (see below).

There is high value in providing such control to hosts. When hosts drive chats, it helps keep conversations organized and clean from UI and UX perspectives, driving rich engagement and more entertainment. Consider: would you want to participate in a chat where every user can build multiple-choice questions or where one person can respond 15 times in a single thread?

Hosts also tend to be more knowledgeable about the streaming content with more resources at their disposal — during a NASA launch, for example, hosts may have a team helping to look up accurate and well-researched stats that can then be built into the conversation or threads.

In our examples above and below, the host is adding content and boosting engagements while not distracting or pushing users away from the main conversation. 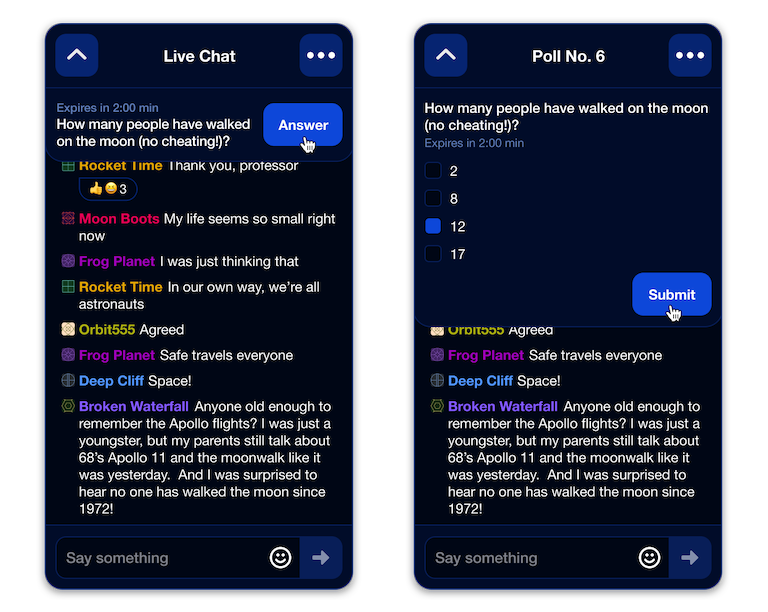 Meanwhile, portal views for users should differ from hosts. While the former group sees a standard grouping — video, chats, threads — the hosts’ view may see a wider display of the chat, multiple threads, and content hubs to draft future comments, questions, or reactions. Keep in mind, though, that designing for two viewing portals means still keeping the presentation similar. Hosts and users should be interacting with matching UI so that the conversations remain natural and reward instinctual interactions. 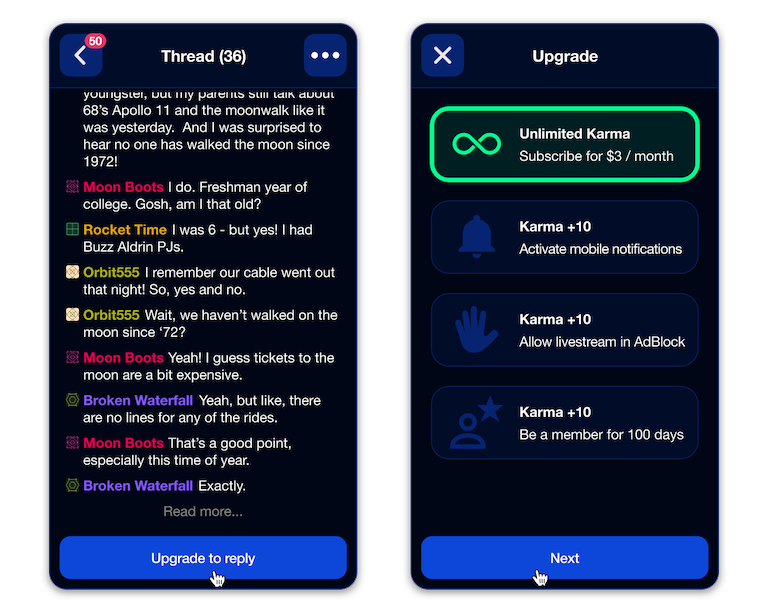 Lastly, control over threads can also be extended to certain users. Power users or those who have built high-karma can be rewarded in their chat abilities — they, too, may be able to create various types of threads or contribute at will. By adding emoji replies, excluding AdBlockers, becoming a member or paying for an account, users could be given wider latitude for creating and replying to threads. Perhaps the best part: these incentives not only help build loyal audiences but also help promote better behavior among all participants.

There is no one-size-fits-all solution for implementing threads and replies into livestream chats. But following UX best practices can help create intuitive, easy-to-follow interfaces that enhance chats and boosts engagement. (Plus, following best practices makes hosting livestreams easier and more fun.) Because the joy in livestream chats are those real-time interactions that correspond with the live video — that, after all, is why we’re there in the first place. Threads and replies should only continue that conversation. To build livestream chats that people want to use again and again, platforms must deliver consistent experiences.

Want to discuss livestream chat more in-depth? Get in touch with Stream.