A Guide to Developer Marketing in 2020

Stream provides Feeds, which allow developers to build event-driven applications similar to social media platforms such as Instagram, Facebook, or Twitter, in a matter of days versus months or years. Stream also provides Chat, a product that enables developers to rapidly build out a fully functional chat application for everything from a one to one messaging platform similar to WhatsApp to live stream chat experiences like that seen on Twitch.

As of today, over 500 million (and growing) end-users rely on Stream’s services to interact and engage with applications they love – that developers have built with Stream’s technology. Ok, now that we are done with our shameless plug, we want to share some thoughts about a different part of building a tech company -- developer marketing. What is it? How can you use it?

In this post, we’ll outline the key areas in which Developer Marketing can help your business thrive by addressing the techniques that we have tried, tested, and practice here at Stream.

In your typical business, a sales team reaches out to businesses (B2B) or consumers (B2C). However, in today’s world, of technology startups (SaaS, IaaS, etc.), the focus of engagement has shifted towards developers (B2D), who consume API driven platforms to power their applications at scale. While developers are consumers, they react differently than your typical consumer. They are even more skeptical and analytical, and they know when they are being marketed to and are turned off by the pushiness of traditional sales models and advertising.

Marketing to developers means thinking like developers (and it’s still challenging, even when you do so). Most developers are constantly reading and learning about the newest methods and technologies, so they already have a pretty good idea of what is out there and works well. Developers decide on new technologies to use by experimenting and building to find pain points, ways around them, and to later share findings within their communities. They need to see the technologies in action and play with them in low-risk, “curiosity” scenarios before making the decision themselves to bring them into their core stacks (be it for personal or professional use).

Here at Stream, our core userbase consists of developers. In fact, it’s 95-100% of our core userbase, and the majority of us are developers, as well. Because of our own experiences with “being marketed to” and finding the technologies we now use, our Developer Marketing team spends a tremendous amount of effort towards connecting and collaborating with fellow developers. This is not just to win them over, but to ensure that their experience with our product, APIs and SDKs is nothing less than amazing.

Developers are inherently skeptical and want to try your product first hand. Here at Stream, we put an immense amount of effort towards creating API walkthroughs that allow developers to easily guide themselves through how our API works. In fact, our efforts paid off when we won the Programmable Web’s Developer Experience award for our unique onboarding process.

For example, our Stream Chat API tour guides the developer through the process of creating a chat application with a hands-on approach. It focuses on what developers want to see – code and the underlying SDKs that power the chat product. In less than 3 minutes, developers have a solid and fundamental understanding of how our chat product works. 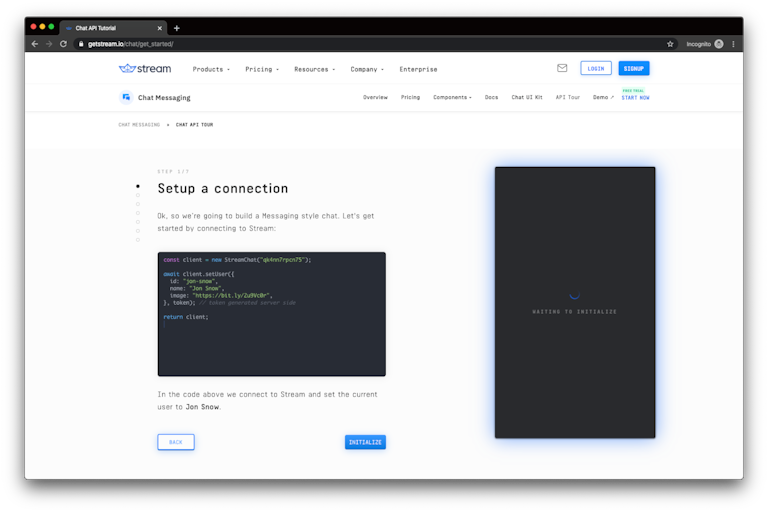 We do the same for Stream Feeds by guiding users through the process of creating users, adding an activity, and so on. This process creates a connection between Stream and our end-user, the developer. We do this because for the longest time software was built to attract product and purchasing managers who were managing a development team. Instead, we focus on putting the developer first. 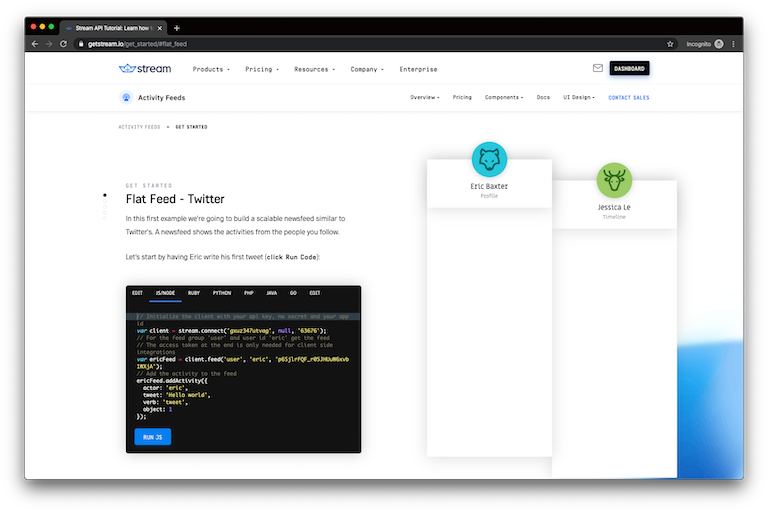 In addition to our live onboarding guides, we have several API tutorials that show developers how to build on top of Stream Feeds or Chat with Android, iOS, React and React Native. These are regularly tested to ensure that they are always in working condition. Never “set it and forget it” and always be one step ahead of your code should things go awry.

Blogging has always been a traditional way to get the word out about your company. The problem is that too many companies try to sell their company too hard in the process. To developers, this doesn’t provide an analytical justification to purchase or even use their offering. It actually comes across with a negative connotation.

Remember, developers do not like to be marketed to. They can smell it from a mile away, and they hate it. Rather than writing a blog post about your company and all of the bells and whistles that your product offering comes with, try speaking the same language as your core developer audience. Write about common use-cases, development stacks, your engineering team, anything that doesn’t smell like marketing fluff.

At Stream, we have a wide variety of blog posts ranging from the time it takes to buy and implement Stream vs. build the product from scratch to how we migrated from one language to another. These are the types of posts that win developers over and allow you to establish trust and, eventually, a relationship.

The rule of thumb with a blog post is to give 90-95% of your wisdom away for free and hopefully, that proves your expertise as a thought leader in the space. Because you are perceived as an expert, you won’t have to actively “sell” to the developer; instead, it’s a collaborative requirement gathering to execute together.

Submit your blog posts to publications on Medium such as Better Programming, or Dev.to where developers will discover your content, fire off a Tweet or two, make yourself known and developers will come to you – as long as you’re not too pushy in your writing. 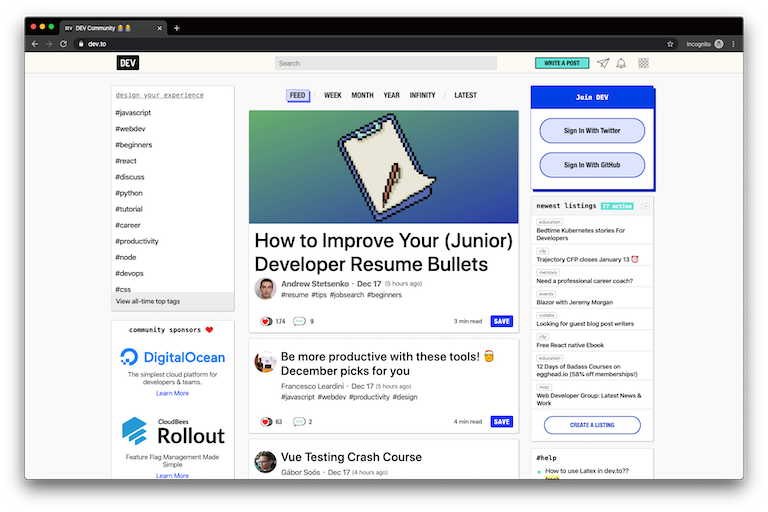 Live where developers live. Developers are a rare breed. They spend the vast majority of their time on the internet, pushing code to GitHub, reading through hundreds of links on Hacker News, trolling Reddit, and believe it or not, blogging about their latest accomplishments on platforms such as Medium. 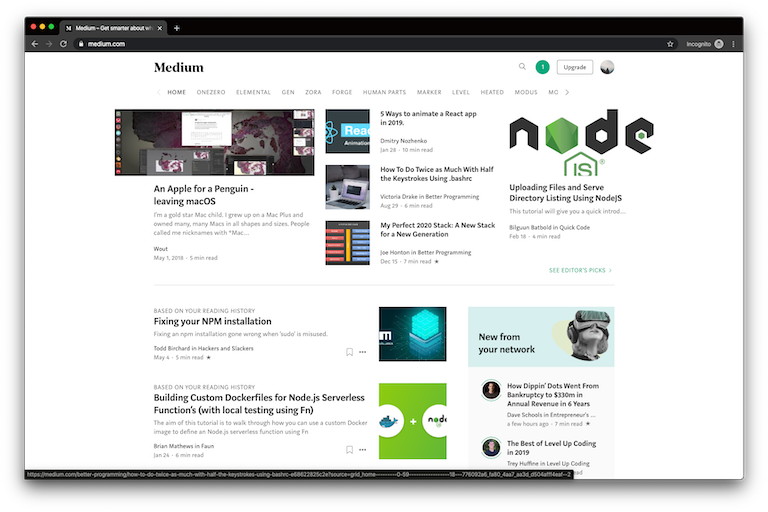 Now, I’m not a huge fan of advertising for the reasons listed above, but newsletters work great and will help your marketing team gain company exposure among developers – if you hit the right channels. Cooper Press is a great source for finding developer-focused newsletters that have both a high open and click rate. Depending on what we are promoting, we vary what we channel we promote on, but React and Mobile weekly have done exceptionally well for us recently.

Every developer loves swag. That means anything from t-shirts to stickers and even socks! If you’re going after a specific company and want them to use your product, surprise them with some swag to make them feel loved. Recently, the team over at Heroku sent Stream a box of t-shirts and Heroku branded socks. While it may seem silly, this won over our developers and we’re now using Heroku for some of our services. A great service for this is Swag.com. 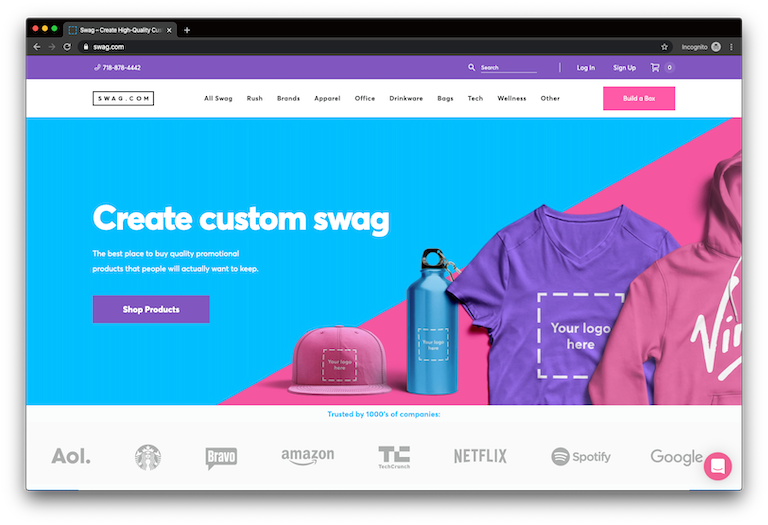 On the other hand, LinkedIn reached out about their recruiting tool by sending our team a 16x16” book with fun facts about their software. Although nice, that was received by laughter within the office. Although this was meant for a business representative, nobody wants a book full of information about your product. It goes without saying, but please don’t do this.

Let’s face it; marketing to developers is not an easy feat. You need to live, breathe, and think like a developer. And more importantly, you shouldn’t overdo it, or you will come across as desperate. With a small team, you can make serious moves from a developer marketing standpoint. You simply have to follow the steps above.