Create a GraphQL API with Node, Mongoose, and Express

GraphQL is a technology that helps developers across the board to build more robust software more quickly. The ability to request all of the information you need in a single request is a game-changer. It has simplified my backend development of APIs for consumption by mobile and web applications that would normally rely on RESTful APIs. A normal RESTful API may have several endpoints for various entities (e.g. users, submissions, etc.); with GraphQL, you can get all of this information in a single go using GraphQL’s query language, also known as GQL.

GraphQL is a technology that helps developers across the board to build more robust software more quickly. The ability to request all of the information you need in a single request is a game-changer. It has simplified my backend development of APIs for consumption by mobile and web applications that would normally rely on RESTful APIs. A normal RESTful API may have several endpoints for various entities (e.g. users, submissions, etc.); with GraphQL, you can get all of this information in a single go using GraphQL’s query language, also known as GQL.

In this tutorial, I’ll walk you through how to build a GraphQL API with graphql-compose-mongoose, as well as a few other tools. And, of course, everything will be to ES6 spec using Node.js. If this sounds like an exciting adventure, read on!

To get started, we’ll need to double-check that you have a few prerequisites to ensure both that you understand the technology, and that you can complete the tutorial in full.

To start, create a new directory. You can name your directory whatever you would like; for this tutorial, we’re going to create a todo application, so I called mine “todo”.

Next, let’s go ahead and generate our package.json file using yarn. We’ll add modules as necessary as we continue to move forward.

Note: Answer the questions as prompted. Nothing necessarily required here, just whatever you’d like to set as your defaults.

Because we are using ES6, we’ll need to transpile all code from ES6 to vanilla JavaScript. To do so, let’s go ahead and create a src directory. Note that we’ll also need to set up the required structure within src. The script below will accomplish the following:

Lastly, we’ll create an index.js file, which will allow us to import our dependent files and directories:

Inside of index.js, place the following contents and save: 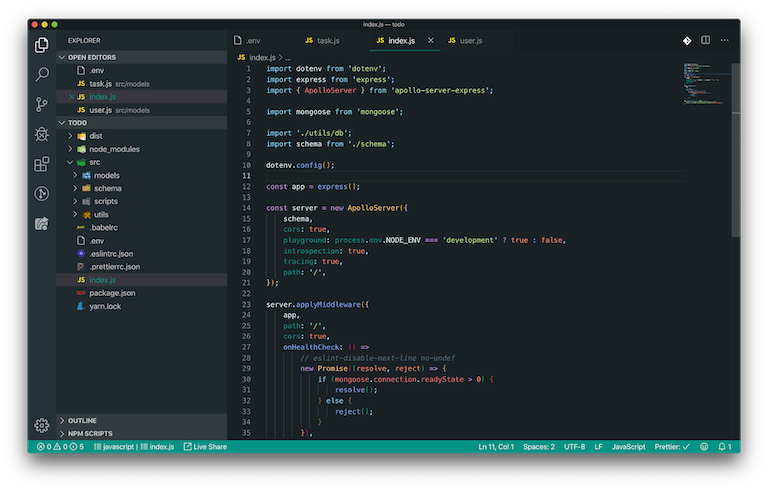 Now that we have the base files in place, let’s go ahead and add the required production packages to our package.json file using yarn, like so:

And for development packages, add the following: 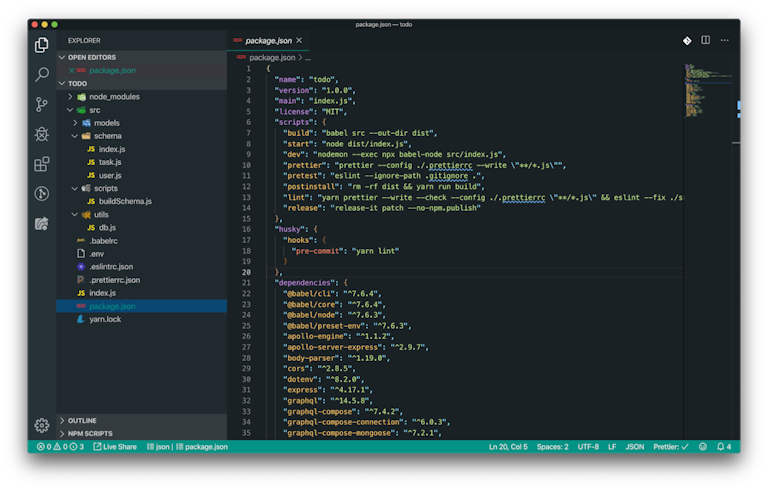 The below will allow us to run scripts via yarn (e.g. yarn <INSERT SCRIPT HERE>). For example, we can lint our code using yarn lint and it will perform Eslint and Prettier operations on our files.

Similar to above, we’ll add a Husky script that will trigger on the pre-commit event, effectively running yarn lint for us prior to committing code. This is an excellent practice for maintaining quality, clean code:

That’s all for scripts. Let’s continue on.

We’ve taken the necessary steps to install the correct packages for Babel, Prettier, and Eslint. Now, it’s time to add the configuration files to the root of your project. Move the root and add the following files:

On to the next section!

The reason that I enjoy working with graphql-compose-mongoose is that it allows me to use Mongoose models rather than writing GraphQL models by hand (which, by the way, can become quite cumbersome on a large application!).

Head over to src/models and create a new file named user.js. Inside this file, we will define all of the required characteristics that make up a user. This will be a small file, but feel free to add additional information to the user record if you wish (for example, a password using mongoose-bcrypt).

Next, let’s create a task.js file (given that this is, after all, a todo GraphQL API):

We now have two models/schemas: UserSchema and TaskSchema. A user is an individual entity, and a task always belongs to a user. From this, we will eventually be able to pull all tasks for a user in a single GraphQL call. Pretty cool, right?

Schemas are an interesting part of this implementation. They, essentially, allow us to define what calls can and cannot be made to the server. Schemas are made up of “Queries” and “Mutations”, where Queries allow you to fetch data, and Mutations allow you to modify data. Let’s create our schemas for both the user and task model...

Inside of the schema directory, create a file called user.js. Then, drop the following contents into the file:

Next, let’s create one called task.js:

To tie things together, we’ll generate an index.js file in the root of the directory (src/schema) and import our schemas:

Now that we have full CRUD capabilities with GraphQL, let’s add our final utilities! 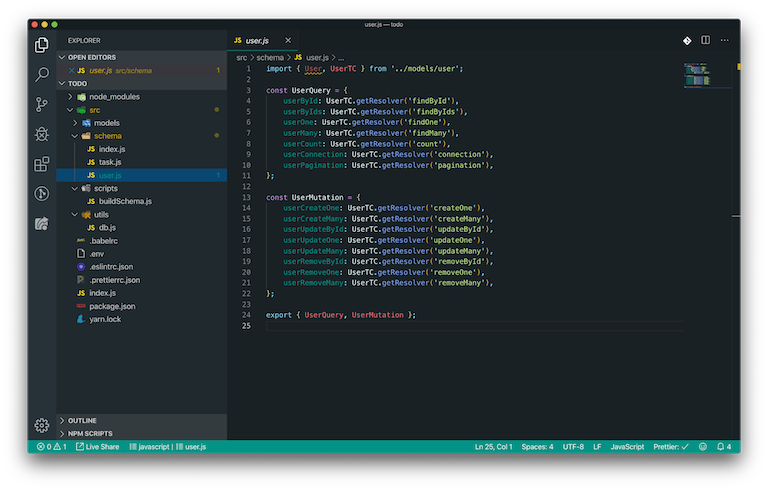 Create a file called buildSchema.js inside of src/scripts and drop the following code in:

This file will be called with the yarn build command and will output the raw GraphQL queries into a data directory. 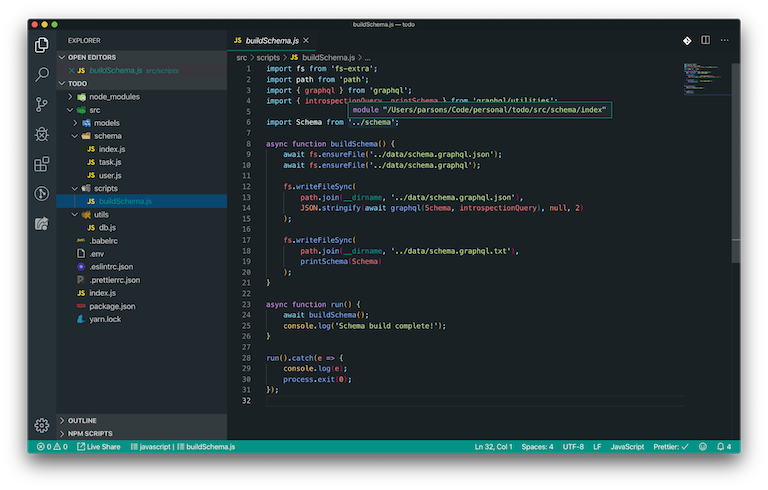 What’s an API without a database? That’s why we’ll need to create a connection from Mongoose to MongoDB.

If you haven’t already created a .env file in the root directory, now is the time to do so. You’ll want to ensure that it has the following environment variables:

Once that your .env file is in place, let’s go ahead and create another file inside of src/utils. Name the file db.js and add the following contents:

Note: If you don’t have MongoDB up and running locally, MongoDB Atlas is a great alternative. Not only is it free, but it packs enough power on the free tier to run a development application without any issues. Check it out here. 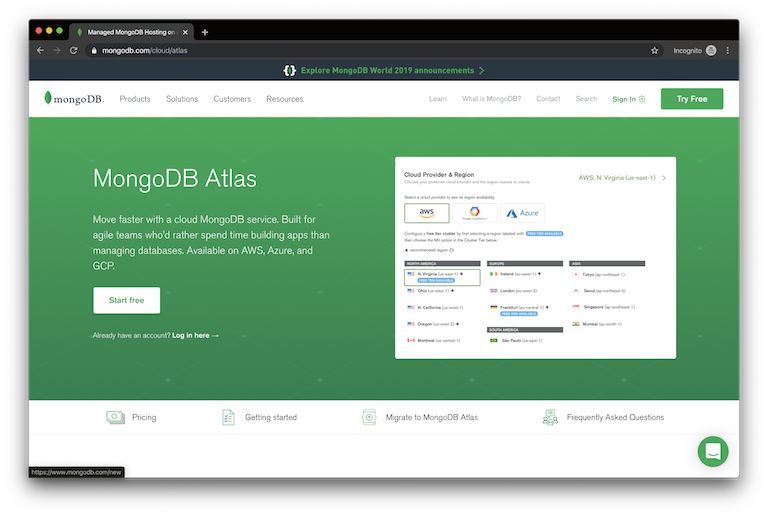 Your GraphQL is now complete! Run the command yarn dev and you’ll be able to spin up the “playground” for GraphQL which allows you to add, modify, remove, query, users, as well as tasks – all in one call. It looks a little something like this: 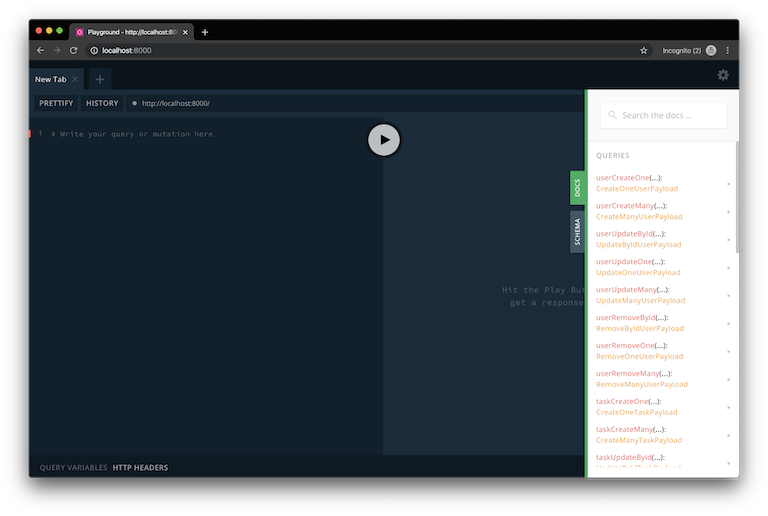 This quick and dirty tutorial is just the beginning of all the fun you can have using GraphQL to make your development stronger, cleaner and more efficient. Try expanding on what you’ve just built to add additional functionality to the models or venture out on your own to improve one of your existing applications or even spin up a new one; I would love to hear more about all that you decide to do!

Until then, thank you for following me along throughout this tutorial and stay tuned for future updates! Happy coding! 🤓