Tutorial: How to Build a Slack Clone with React Native – Part 2

React Native has come a long way since its first release in 2015. In fact, it has enough components, APIs, and supporting libraries in its present state that you can re-create every app that's out there on the Google Play Store or Apple App Store in no time!

In this series, we will demonstrate how you can build a clone of Slack using React Native. Slack is a widely used messaging
platform for workplaces, and it's quite feature-rich. React Native can handle the front-end side of things for us while relying on Stream Chat, which is equally seamless, for the back-end.

In April 2020, Stream published a Part 1 of this series. There, we covered how to build Slack-type screens for navigation, message lists, and channel lists. Slack designs have changed quite a lot since then, so we will build a Slack clone from scratch with updated designs and additional features.

We have decided to divide this tutorial into two parts (Part 2 and Part 3).

In Part 2 (this tutorial) and 3 of this series, we will focus on the following items:

Note: The objective of this tutorial is not intended to help you build a production-ready clone of the Slack application (because it already exists). Rather, this tutorial is a comprehensive guide on how to build real-time chat using UI components provided by Stream's Chat and Messaging API and SDKs.

Below are a few links to help you if you get stuck along the way:

If you would like to see the final state of the app in action quickly, clone the following expo example of the slack clone and run it on the emulator or a phone:

Before getting started, make sure you have a development environment setup for react-native. Read the Installing Dependencies section of the official react-native docs.

Once you have a dev environment setup, create a new react-native application:

Slack uses Lato font, which is available free on https://fonts.google.com/. For visual parity, we need to import the font into our app. To do so, create a file named react-native.config.js in the project directory and paste the following contents:

Next, prepare the following directory structure in the root directory of the project: 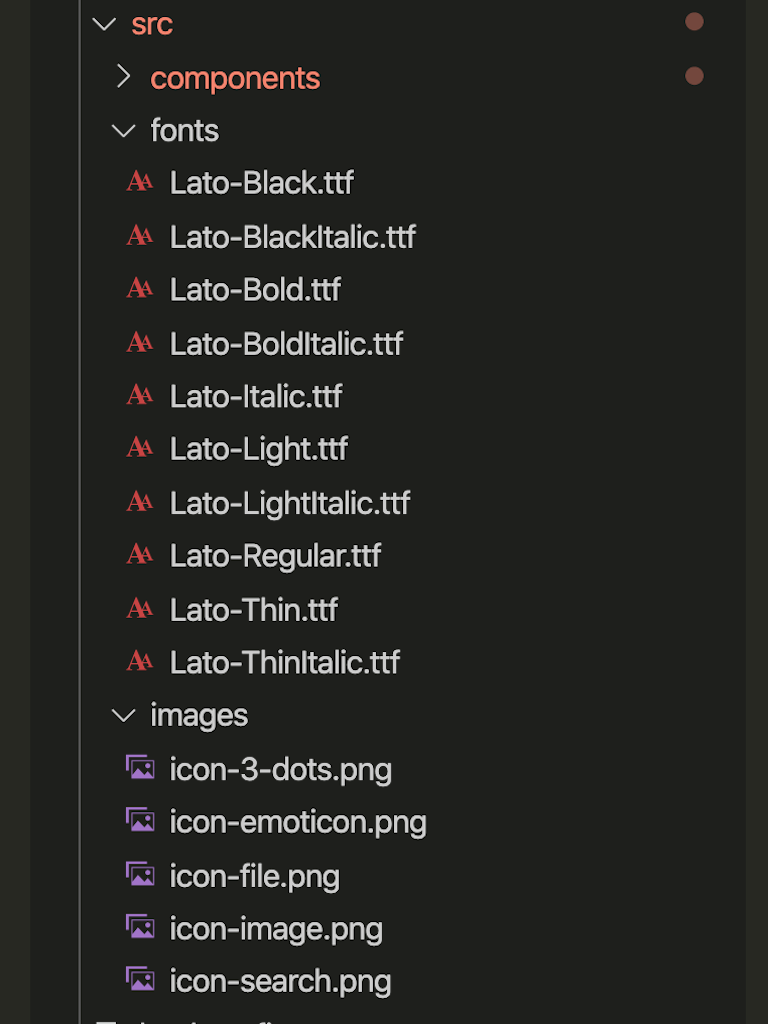 Also, change the content of index.js in the root directory to the following:

This completes the setup required for your slack-clone app. You should now be able to run the app with the following command to launch the app on an emulator. Once started, you will see a welcome screen to React Native. 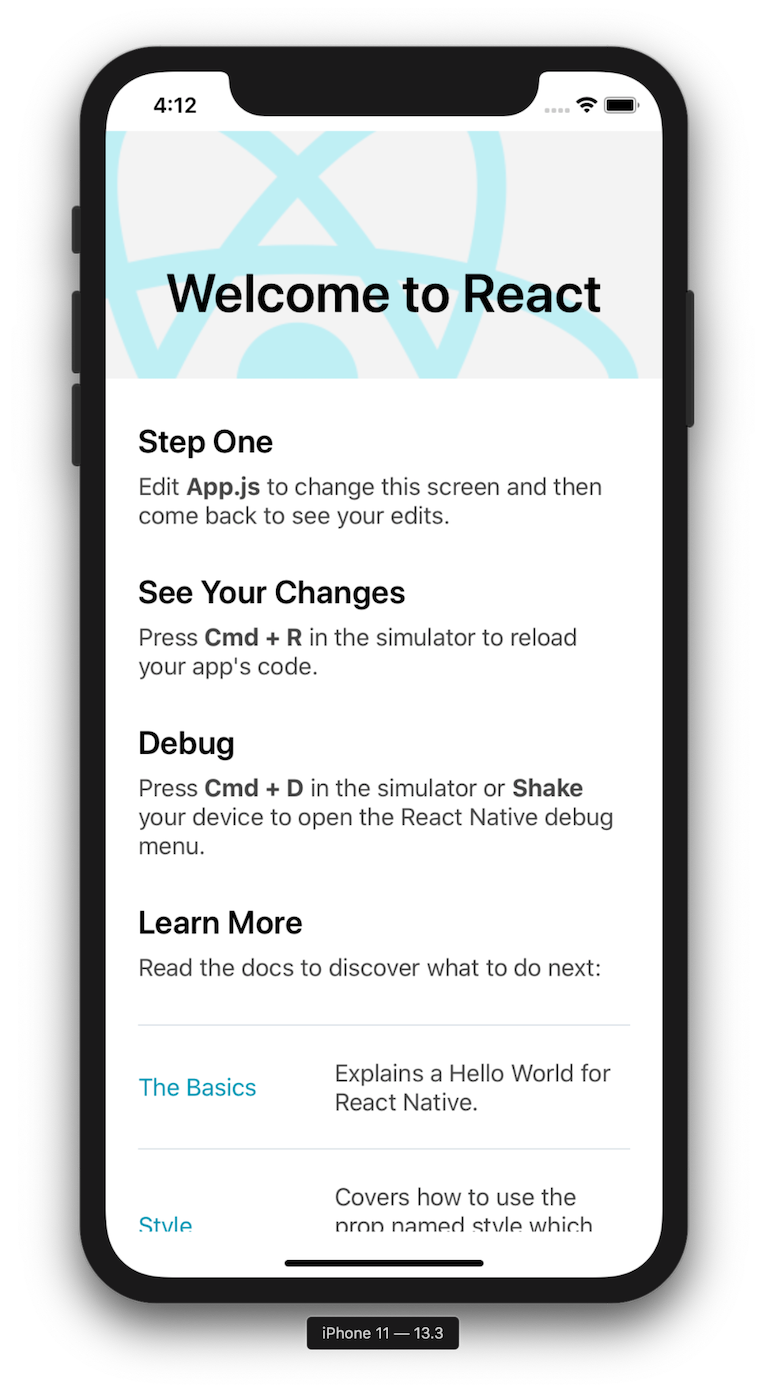 Here's how to add a few essential utilities into your app.

To make it easy to use svg icons across the app, create a separate component, SVGIcon, which accepts type, height, and width props and renders the icon on view. Create a component in src/components/SVGIcon.js.

We will add support for dark mode, so we need to create separate themes for the app. We are using a theme provider from react-navigation for this project. You can check out the documentation to know more about themes and useTheme hook

Next, create a Text component with the Lato font-family, which will used across the app.

Copy the rest of the utils from here to src/utils/ directory. You can read through the code comments about it, but they will make more sense as we use them through this tutorial.

The utils/useStreamChatTheme.js file exports a hook, which provides a theme for Stream Chat components. If you are not aware of theming for chat components from stream-chat-react-native library, please check this link. We need these styles to change according to the system theme (dark-light), so we have built a hook around this theme object in src/utils/useStreamChatTheme.js.

Before we dive into the navigation part, lets first design the screen header and floating action button: 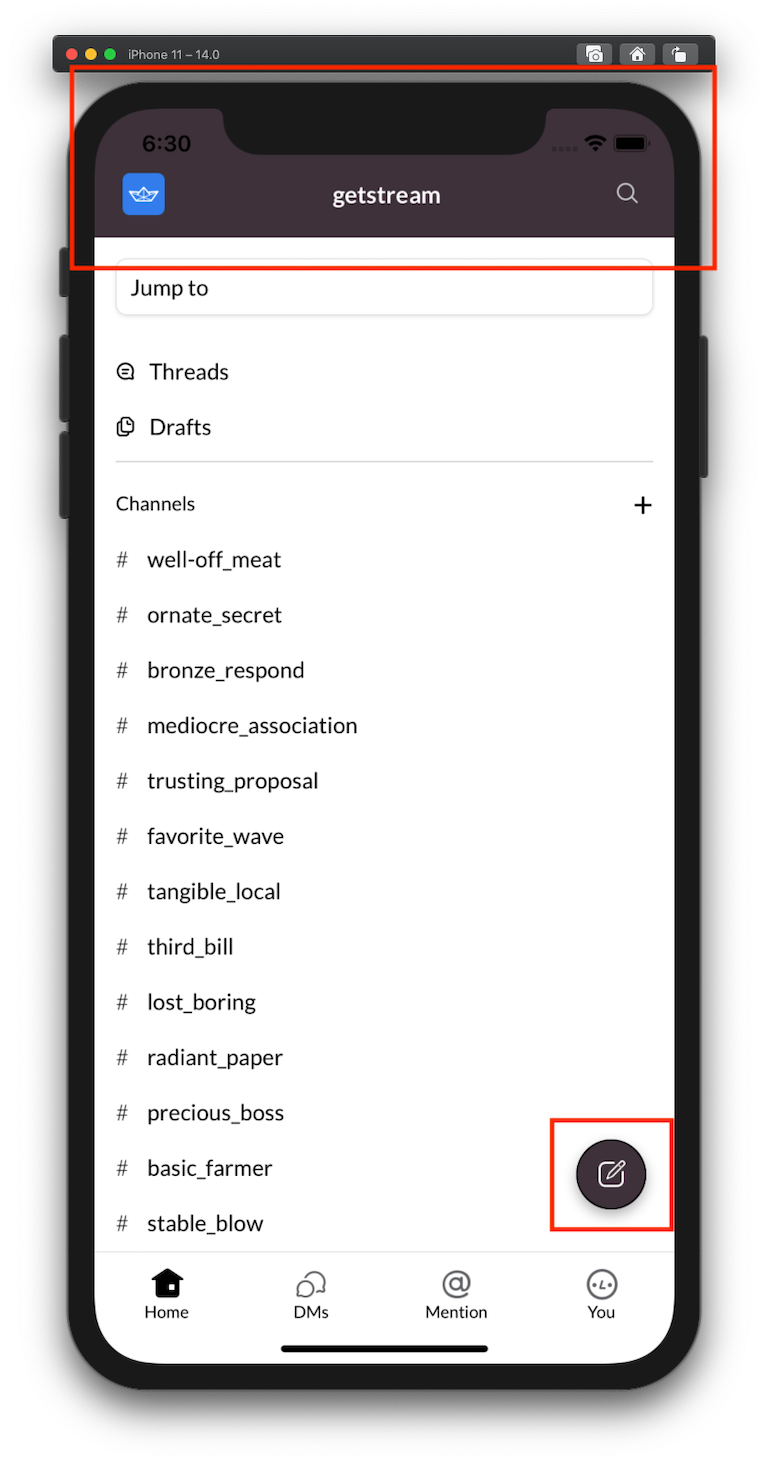 The ScreenHeader component is below. We are using the useSafeAreaInsets hook to avoid overlapping content with the top inset of a device such as the iPhone 11.

The floating action button, which opens the new message screen (which we will implement later), is as follows:

Let's move on to setting up the navigation for our app, similar to Slack. Replace App.js with the following. It's essential to place navigation components at the correct position in the stack.

We need screens such as a draft screen or thread screen outside of the bottom tab navigation, so they go at the root level. Screens such as channel searches are a perfect example of react-navigation modals.

If you refresh the app, you should see the following navigation. You can toggle the dark mode by pressing cmd + shift + a.

Now, set up the channel list screen. This is similar to how we did it in Part 1 of the tutorial, with few changes.

Let's outline the important specs that we need to implement:

Add the following files to the project:

The useWatchedChannels hook makes two calls to the queryChannels API to:

Once fetched, results are sorted into three variables:

We can reuse the queried channel data in other screens; thus, we are caching it in CacheService. To keep things simple, use an object for caching. You can use redux or some other state management service for this purpose.

Reload the app, and you should see the ChannelList screen working in the app.

Let's start by building the header for the channel screen.

Now we can build a ChannelScreen component with the following functionality:

MessageSlack component is as follows:

If you have read Part 1 of this tutorial, then you will recognize most of the props on MessageSimple component. Copy updated code for these components to src/components directory:

The MessageFooter, ReactionPicker, and MessageActionSheet are the new elements introduced in this version of the Slack clone.

The MessageFooter component now provides a Slack type reaction selector (shown in the following screenshot). ReactionPicker is just another component, whose visibility is controlled by two handles — openReactionPicker and dismissReactionPicker. These two functions are available on MessageSimple and all its children as props. 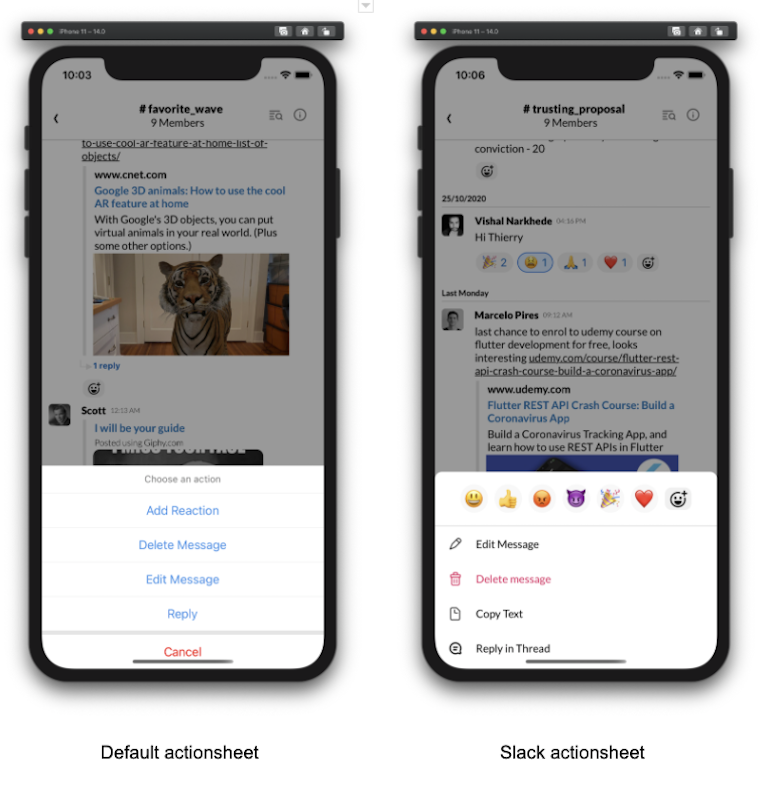 Now assign the ChannelScreen component to its respective HomeStack.Screen in App.js.

If you reload the app, you should see the ChannelScreen working correctly.

You've completed Part 2 of our tutorial on building a Slack clone using the Stream’s Chat API with React Native. In Part 3 of the tutorial, we cover various search screens on the Slack clone app and threads screen.