Update: Here is an excellent post on the vision for 2020's tech trends in cloud computing between the CEO of Ionic, Max Lynch, and CEO of Stream, Thierry Schellenbach.

There is a massive difference between platforms such as React Native and Flutter compared to Ionic. Ionic believes that the open technology that powers today’s web is the future and should be used to build mobile apps. Due to that approach, Ionic is one of the only popular platforms that allows you to reuse the same codebase for both web and mobile devices - allowing you to keep your code DRY (don't repeat yourself).

The benefit of Ionic is that you’re using web-based technologies and can reuse a single codebase. Whereas, Flutter and React Native do not allow you to reuse code as much; however, their performance is much closer to a native application feel. Still, having the ability to keep your code DRY is and should be the primary goal with any application build. Both are still excellent for building in-app chat.

In this tutorial show, I'll walk you through how to build a real-time Ionicbchat application using React (yes, the same version you use for the web) and Stream’s real-time Chat API.

If you want to skip ahead, a demo is available on Appetize, so you can evaluate performance yourself (note that Appetize does slow things down quite a bit though). You can also download the signed APK for Android for a more performant experience. Here is the React / Ionic GitHub repo and here is the API GitHub repo.

To get started with Ionic, download the Ionic CLI using yarn:

Once installed, login to Ionic from the command line using your new CLI:

For now, that’s all that we have to do. We’re going to be using Create React App (next step) to continue our installation.

Next, create a new directory. I’m going to be working in my ~/Code directory, but you’re free to use a directory of your choosing:

Now, install React using Create React App (CRA) – (ionic-chat is the name of the directory that will be generated — this is also optional as you can name it whatever you’d like):

Move into the ionic-chat directory, and we’ll start installing the necessary dependencies.

With our dependencies installed, let’s go ahead and move on to the next step of the setup.

3. Setup the API with Heroku

The API, although small, plays a vital role in chat. The API accepts user credentials from the login screen and generates a JWT for use within the chat application. It also adds the user to the channel.

To spin up the API, I’ve included a simple one-click Heroku button. This will generate a new application on Heroku and then create a Stream Chat trial for you to use.

After clicking the Heroku button, you will be prompted to add an application name – make this unique. Then click “Deploy” to kick off the Heroku deploy process. 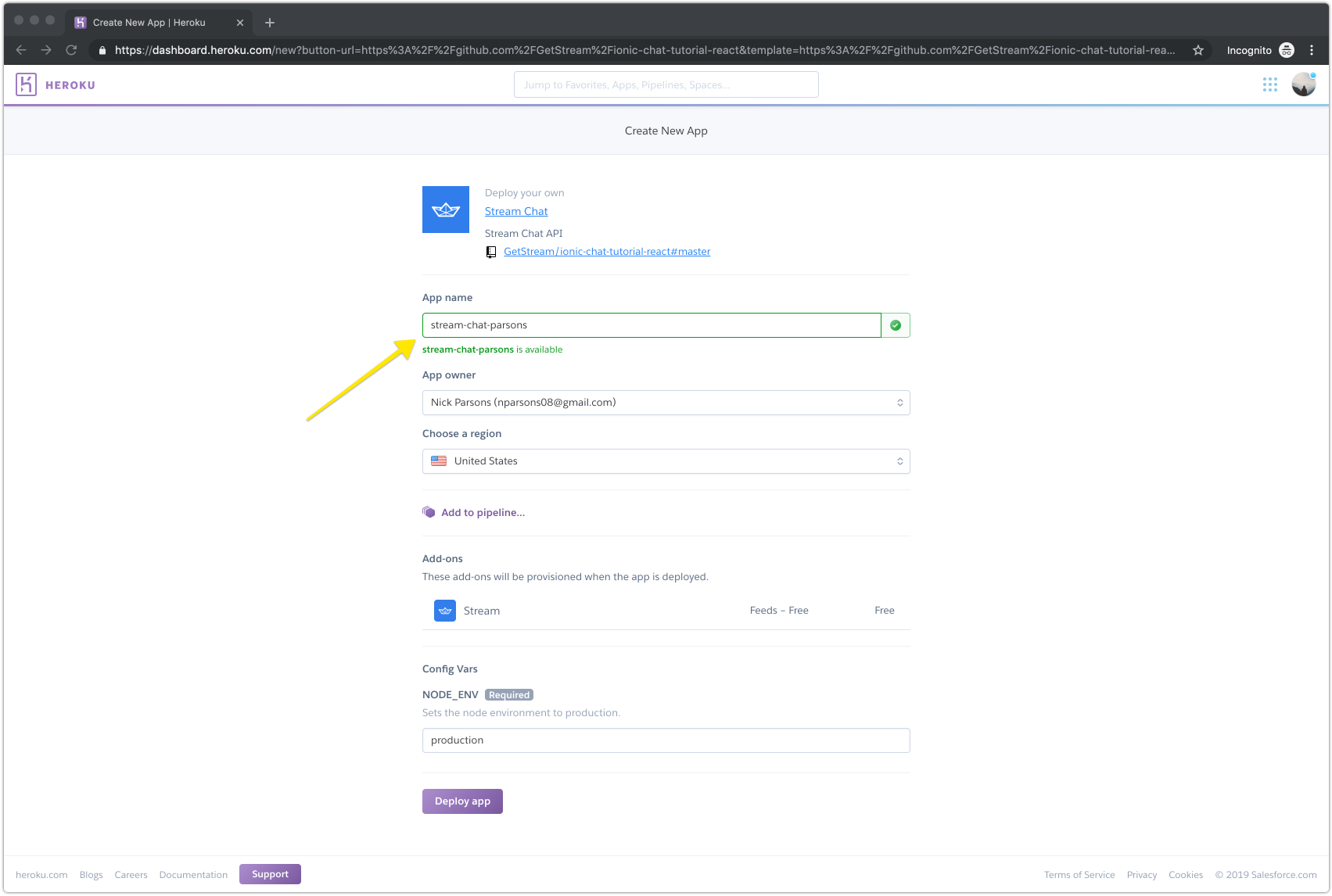 Alternatively, if you would like to skip Heroku, you can clone this GitHub repo and run the API with the yarn start command – be sure to run yarn install before starting and also be sure to fill out your .env with credentials found on the Stream dashboard (you will need to enable a free chat trial).

If you have XCode installed, you’re pretty much all set. If not, and you want to download XCode, you can do so here. XCode comes bundled with an iOS Simulator by default.

Should you not wish to install XCode, you can optionally install this npm package, which will install a standalone iOS simulator for you.

The full instructions on how to use it are located here: https://www.npmjs.com/package/ios-sim

Running on iOS with macOS seems to be the fastest way to test your code; however, if you’re on Windows or would simply like to use Android, I’ll cover that below.

Head over to the Android Studio download page and select your download of choice. Android Studio is available for iOS, Windows, and macOS. It’s a large file – the download may take a reasonable amount of time. 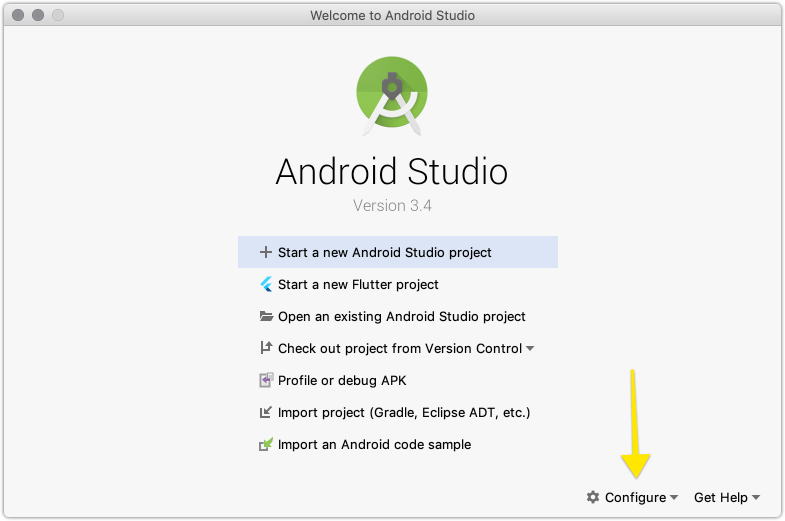 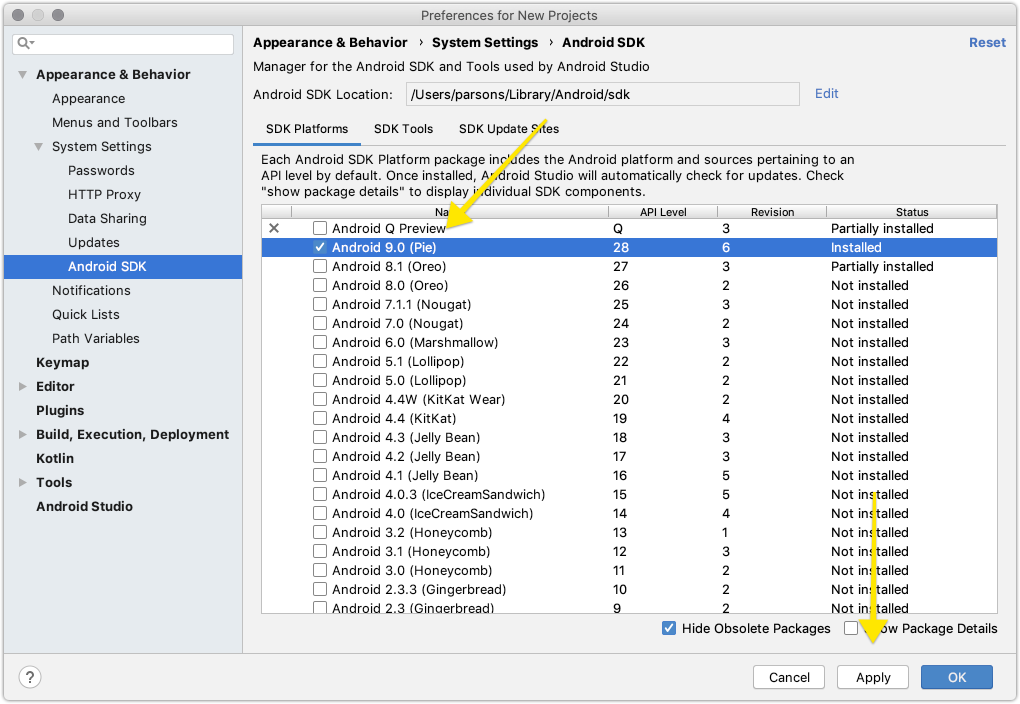 Your download will begin. Once complete, head back to the main screen and click the “Configure” button, followed by “AVD Manager”. On the AVD Manager screen, you will want to click “+ Create Virtual Device”. 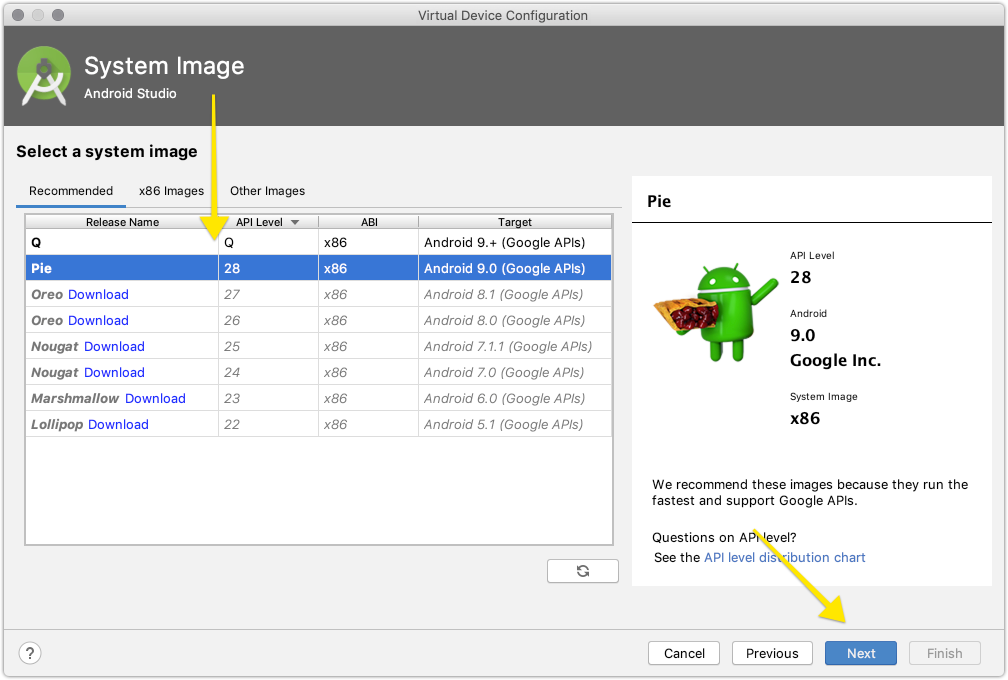 Lastly, click “Finish” and your AVD will be provisioned. Once done, you can safely exit out of the AVD screen, and you will see your newly created AVD in the AVD manager. 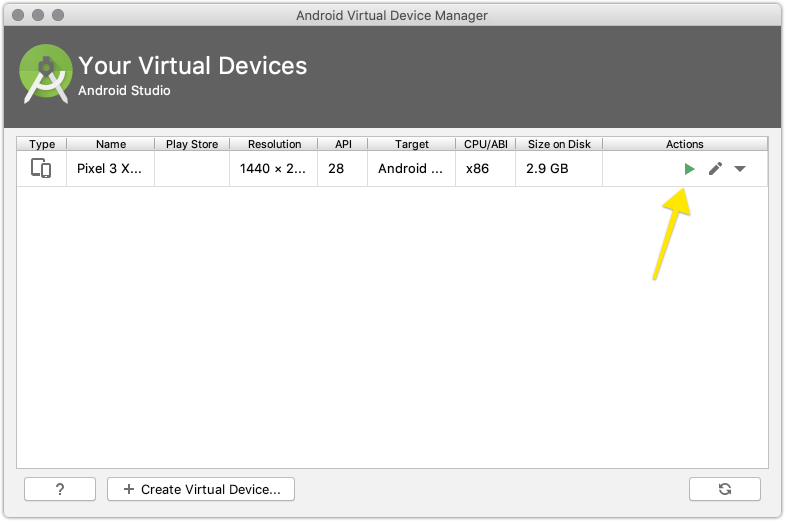 When you click on the "green play button", your AVD will launch! 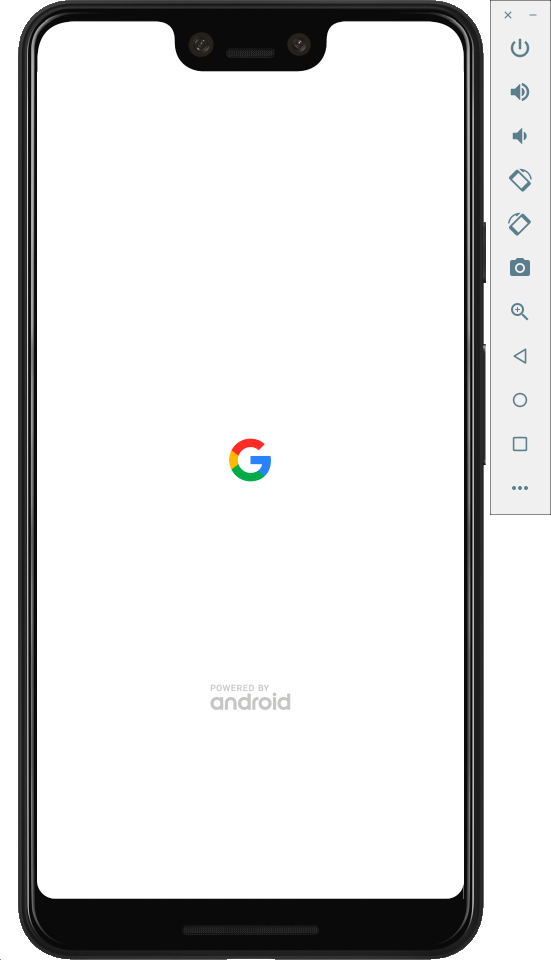 Congratulations! You’ve successfully generated an AVD within Android Studio! We’re not going to use it just yet, but the AVD will come in handy when testing later on in this tutorial.

We have everything set up; now, it’s time to add the necessary files to make our code work! We’ll need to create a handful of files, so pay close attention:

In app.css, swap out all of the existing CSS for this:

In App.js, swap out the existing code for this JavaScript (this logic will take care of routing between files):

Create a file called AuthedRoute.js and drop the contents below into the file:

Create a file named Chat.js and use the following code (this is all of the logic that powers chat):

Next, create a file named Login.js and use the following code (this will add auth to your app):

Remember to swap out the REACT_APP_TOKEN_ENDPOINT environment variable in your .env with your Heroku endpoint credentials.

Now, create a file named UnauthedRoute.js to accommodate for users who enter without being authenticated:

4. Install the Ionic build scripts in your

Capacitor by Ionic is an open-source framework provided by Ionic that helps you build progressive native web apps, mobile, and desktops apps. It’s optimized for Ionic apps; however, it can be used with just about any framework.

We’ll be using Capacitor to lift and prepare our builds for iOS and Android. First things first, though, let’s get Capacitor installed!

Then, start the React app with the following command from your root directory: 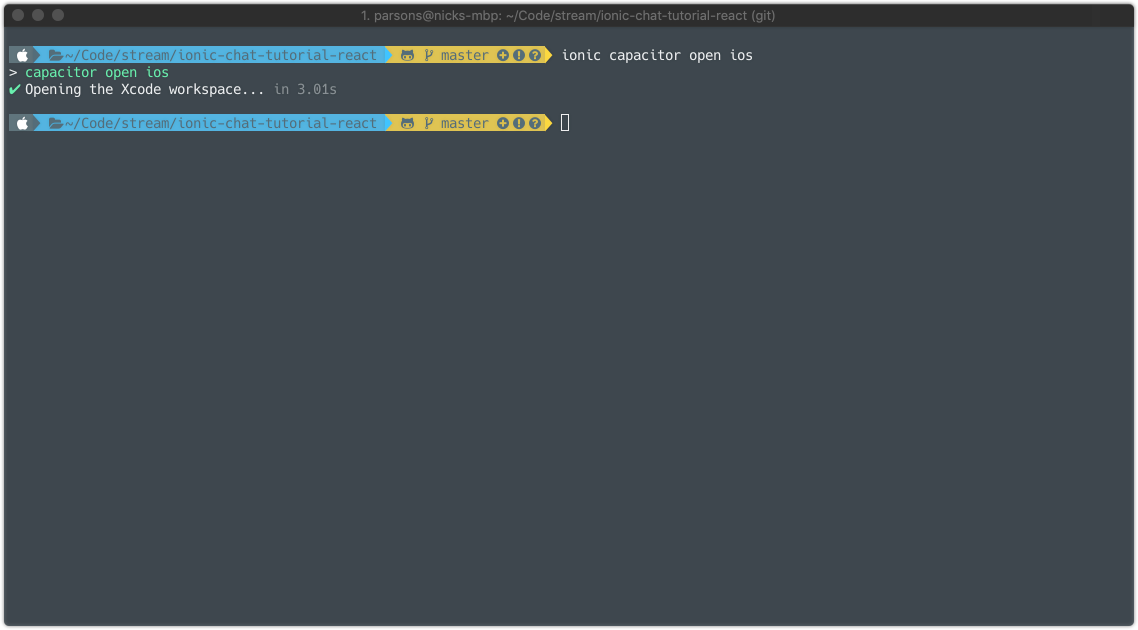 Or, open on Android: 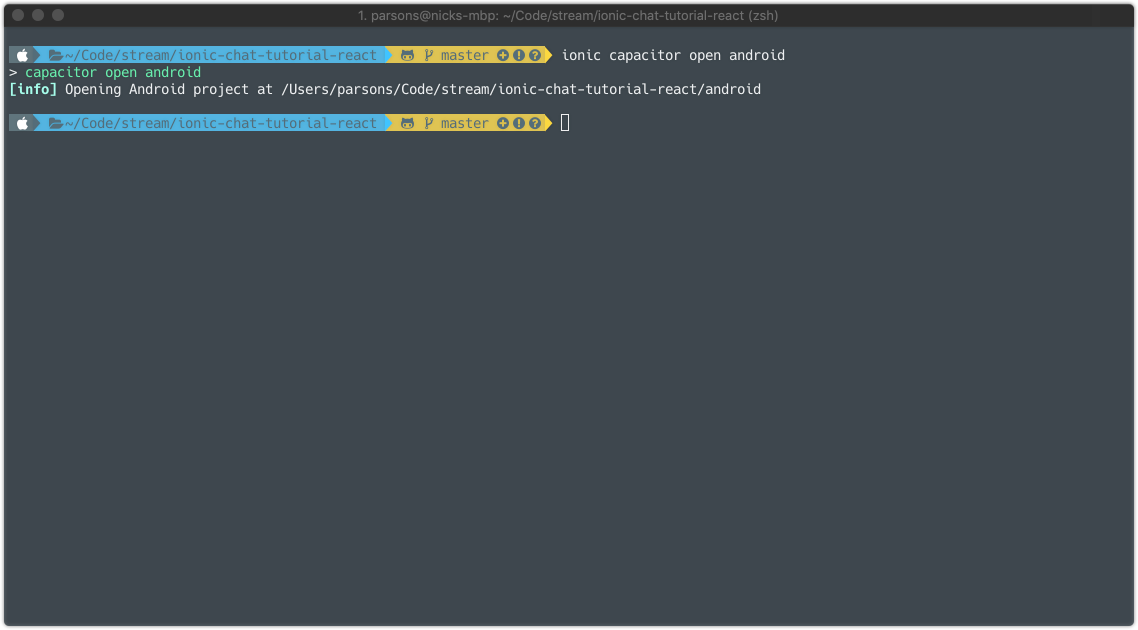 Because I’m running macOS, I’m going to be using the iOS simulator. After running ionic capacitor open ios, XCode will launch. You will want to wait about a minute for it to index the project, and then you can press the run button. 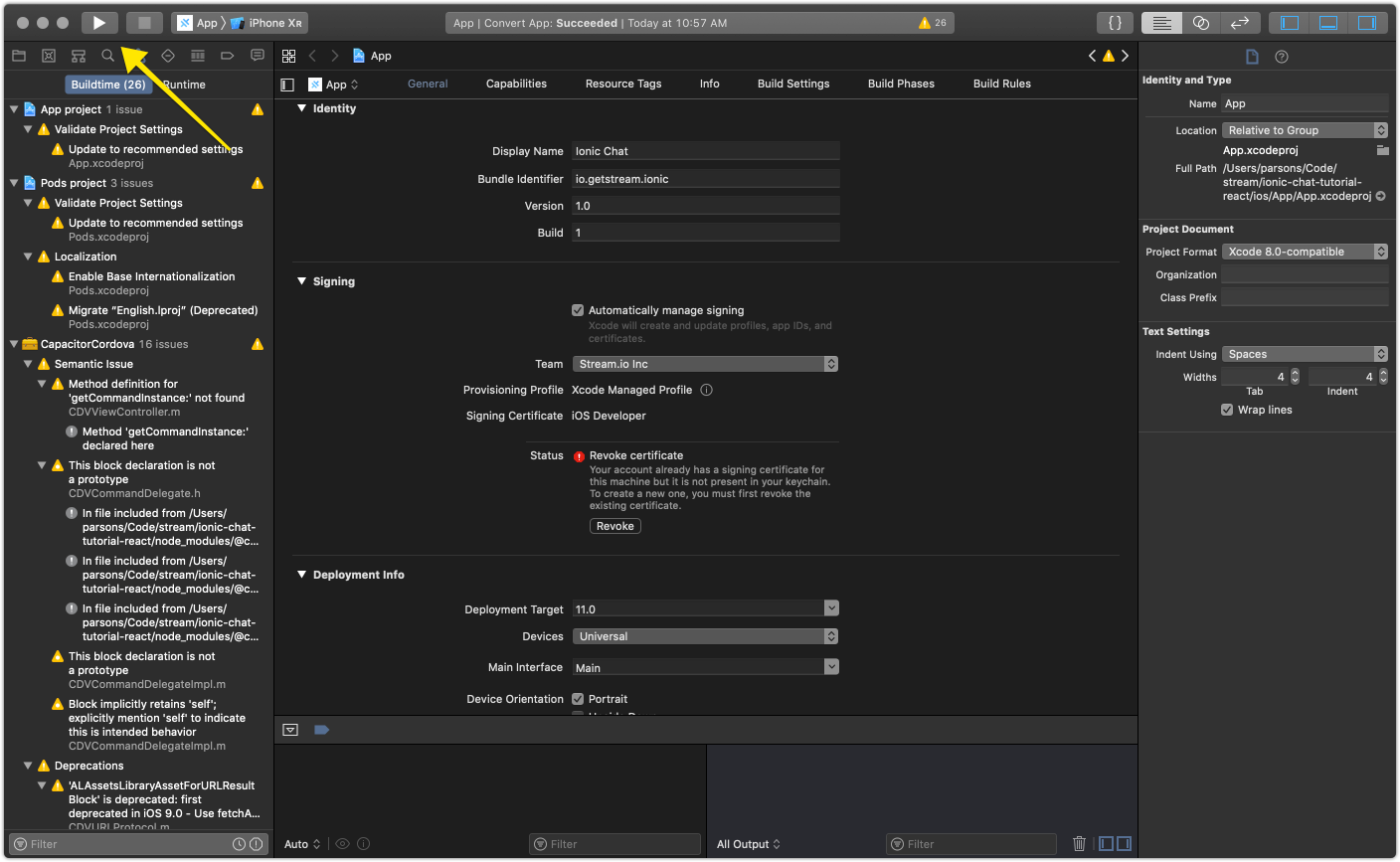 Your iOS simulator should boot up with the application installed, and you should see a login screen similar to this: 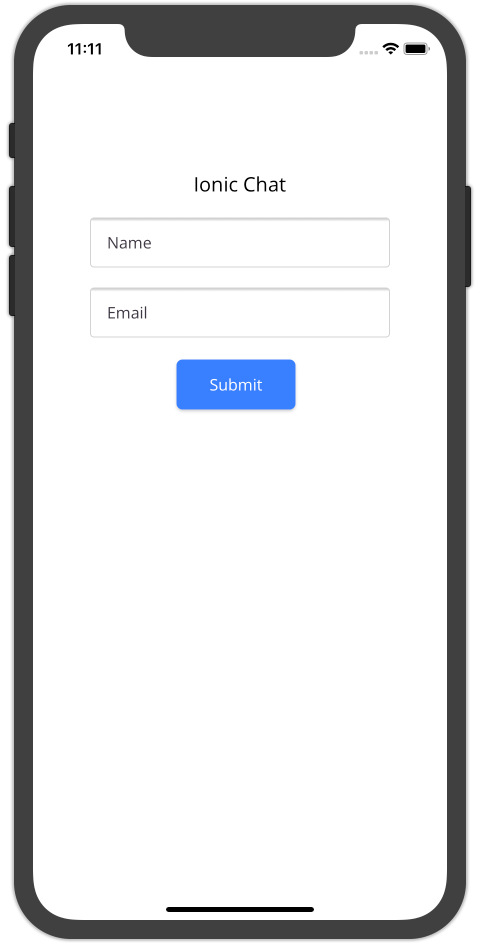 Go ahead and login with your name and email address. Don’t worry, your information is only stored in local storage and is not persisted to a third-party platform of any kind. Once the chat window is loaded, you’ll be able to chat away! 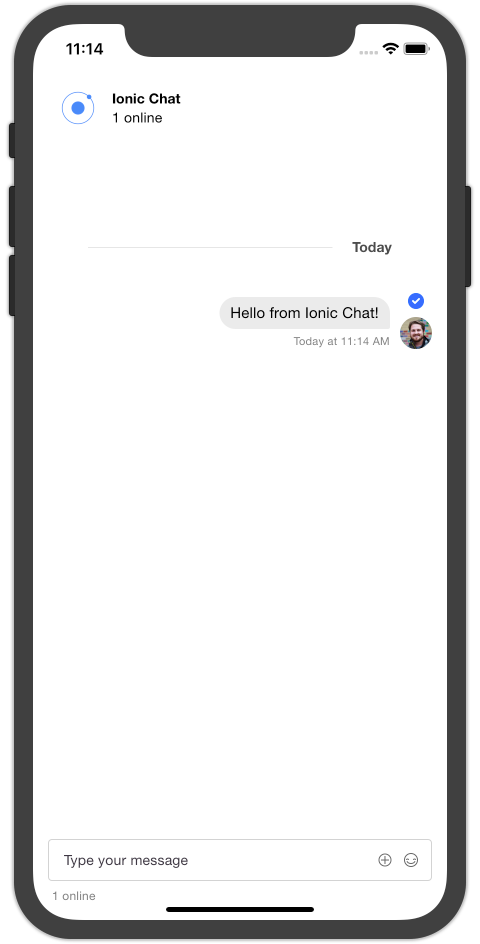 I would encourage you to continue developing against the codebase that you’ve created. If you have run into any issues, you can always clone the repo from GitHub for a fresh start.

In terms of deploying the application to a standalone device such as iOS or Android, Ionic has a great set of tutorials on how to do so. Both tutorials for iOS and Android publication can be found in the Ionic docs.

Additionally, we have another tutorial that shows you how to build a group messaging app with Ionic that you might find useful.

Want to know more about Stream Chat? Have a look at our interactive API tour that will walk you through the various steps of creating chat from scratch with Stream.

Stream also has fantastic API documentation and a beautiful UI Kit that will allow you to build any type of real-time messaging platform.

Last but not least, don't forget to check out our various SDKs for Stream Chat, including tutorials for iOS/Swift and Android/Java/Kotlin.