Recent updates to Stream Chat’s rate limiting behavior give dev teams greater flexibility and control to debug applications, combat malicious traffic, and monitor API usage for account billing purposes. These changes make it easier to avoid hitting rate limits in the first place, easier to recover if you do hit them, and easier to isolate rate limit issues to a specific platform if your application uses more than one Stream SDK. The updates are as follows: 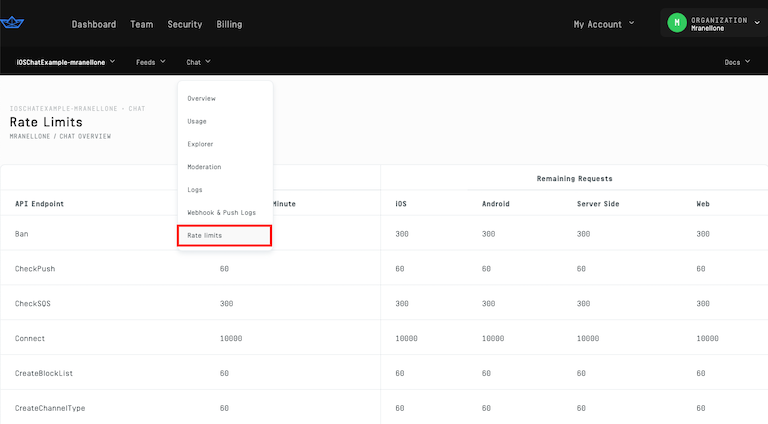 Most rate limit issues trace back to one of two common causes: app abuse, as when bots sign up for thousands of accounts, or integration errors. Integration errors can include things like opening more than one websocket connection per user, running scripts that make too many API calls in rapid succession, or calling an endpoint like QueryChannels unnecessarily.

In both cases, Stream’s new rate limiting behavior is designed to help you identify and resolve problems early, with minimized disruption to your app’s performance. We highly recommend reading our rate limits documentation for more tips to optimize your app’s integration with regard to rate limits.

Stream is proud to set rate limits that make sense for our customers and still fall far below the maximum capacity of our system. Stream Chat is based on Go, RocksDB, and Raft, and it scales well to power some of the world’s largest sites and apps. Still, with infrastructure supporting chat and activity feeds for over a billion end users, it makes sense to set rate limits in order to:

With Stream Chat, different platforms such as iOS, Android, or your server-side infrastructure have independent counters for each API endpoint's rate limit. For example, The default connect endpoint limit is 10,000 per minute. If you've built an integration on iOS and Android, and 6,000 users connect in under a minute from iOS and another 6,000 connect from Android, you will not encounter a rate limit. Instead, you must see 10,001 users connect from just one platform, say iOS, in under a minute, to encounter a rate limit. Independent platforms have independent counters.

In the context of rate limits, Stream Chat supports four different types of platforms via our official SDKs:

These recent rate limit updates are part of an ongoing push to make Stream Chat the most developer-friendly in-app messaging solution available. That commitment includes additional dashboard improvements designed to make it easier to track API usage, understand your bill, and troubleshoot integration issues. If you haven’t already, check out our new historical usage charts, with MAU and concurrent connections visualized over time in your Stream dashboard.