Building a Chat App With ChatKit for Android

Did you know you can integrate Stream’s Android SDK with other open-source libraries? To show you just how easy it is, in this tutorial you’ll leverage data from Stream’s Chat API to power the messaging UI from ChatKit.

Specifically, this tutorial will cover:

Before diving in, it may be helpful to get familiar with all of Stream’s Android component libraries.

However, Stream also offers lower-level libraries you can use on Android:

This tutorial will use ChatKit, an open-source chat UI library by Stfalcon, to build a basic messaging app on top of Stream's offline support library.

You'll be building on top of the offline library, observing the Chat state and displaying it using ChatKit.

Note: You can find the source code for this tutorial in the ChatKit Stream repository on GitHub.

For the purposes of this tutorial, it’s quicker and simpler to use the same hardcoded user defined in the Android Chat Messaging Tutorial.

This will allow you to avoid lots of extra steps, like creating user tokens, fetching your API key and Secret from your Stream dashboard, and creating sample data to populate your channels, among other things.

If you’d still like an account, you can sign up for a free Chat trial. Once you’re signed up, be sure to visit the Android Chat First Steps tutorial to learn how to use the Stream dashboard, create your first sample project, and more.

ChatKit defines various interfaces that its Views can interact with, such as IDialog, IMessage, and IUser. To use ChatKit in your app, you need to create model objects that implement these interfaces.

The Stream Chat SDK already provides its own models for these types, so you’ll need to wrap these into the given interfaces. Let's take the example of just the Dialog (which is called a Channel in Stream's terminology):

This implementation of IDialog takes a Stream Channel object as its parameter and then reads the corresponding properties of the Channel as needed.

It also references implementations of the other two aforementioned ChatKit interfaces, which are similar simple wrappers:

Other than these models, ChatKit also needs an ImageLoader implementation so it can display user avatars.

Use the Coil library to provide this capability:

The interface is straightforward to implement with Coil:

With the models and image loader prepared, you’re ready to build a Channel List screen.

Start with the XML layout, which will contain a full-screen DialogsList from ChatKit:

The DialogsList works with an adapter that will provide it the data that it should display (just like a RecyclerView). You can create this adapter as a property in your MainActivity, and then connect it to the view in an onCreate function:

Note: The adapter receives your CoilImageLoader implementation as a parameter.

The next step is to initializethe Stream Chat SDK by instantiating the ChatClient and ChatDomain classes. To do so, you’ll need your app’s API Key and Secret.

For more information about these steps, see the Android In-App Messaging Tutorial. You’ll use the same hardcoded demo user as the tutorial.

With the connection ready, you can load your list of channels with the loadChannels method:

In the above code snippet, you:

Now, you can build and run the application to see the list of loaded channels! 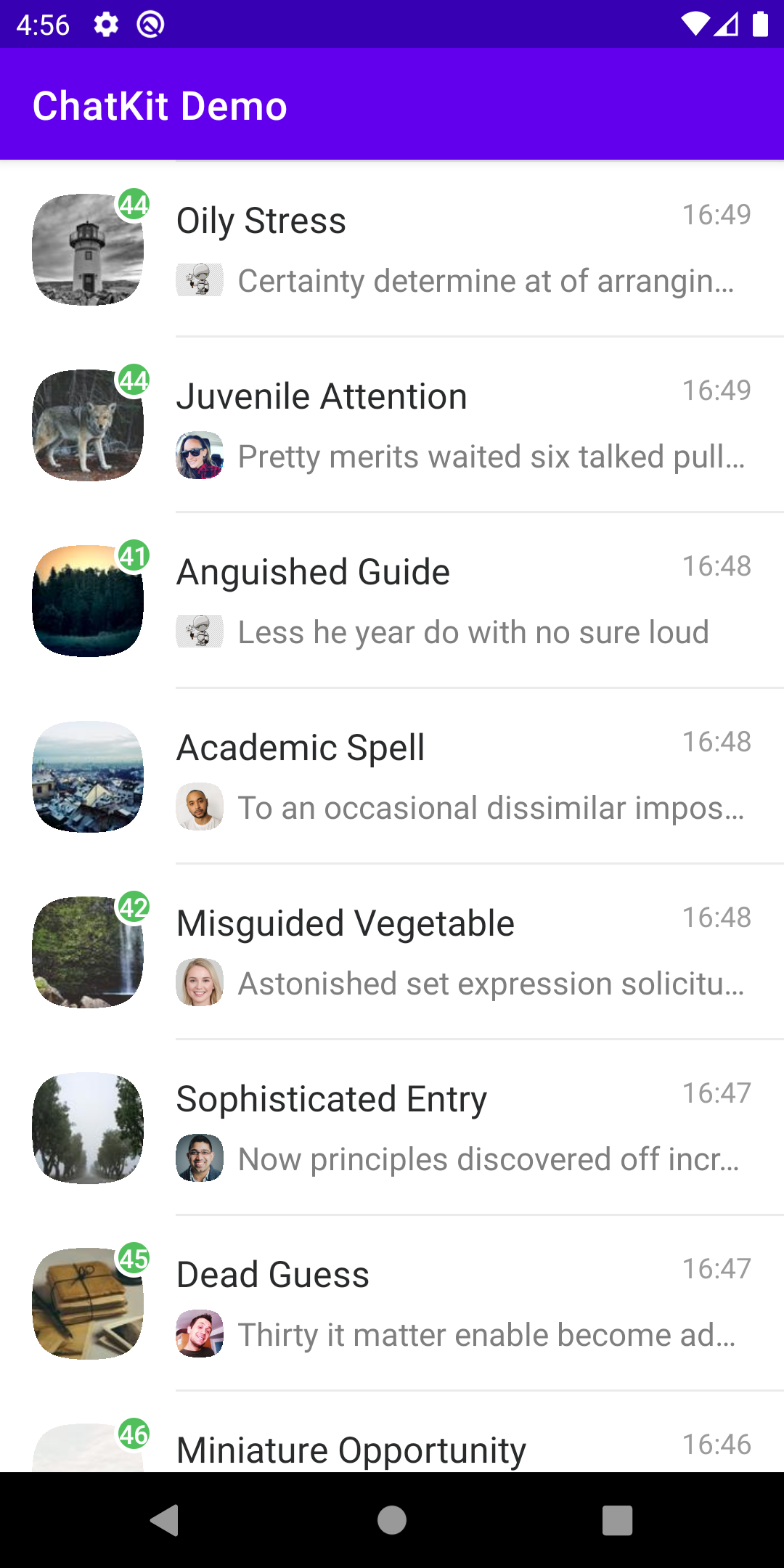 For comparison, here’s how the same screen looks when implemented with Stream’s UI Components: 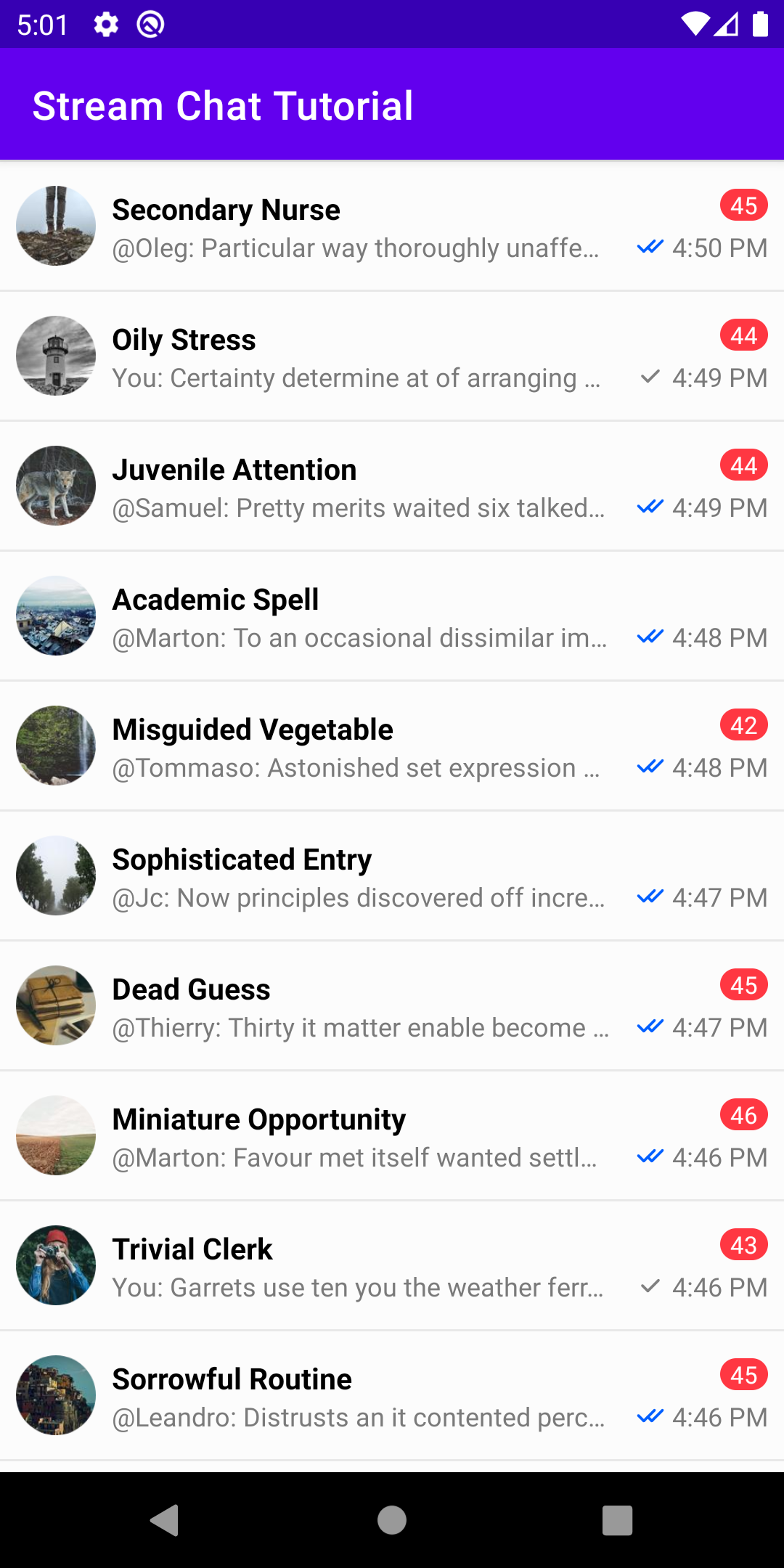 Next, you’ll create a new Empty Activity called MessagesActivity. For the XML layout, you’ll use a MessageList with a MessageInput below it:

This new screen will need to receive the channel's ID as a parameter, which you'll pass through Intent extras. It'll also use an adapter to display the list of messages, which you'll connect to MessagesList:

With the cid extracted from the Intent, you can now use ChatDomain again, this time to grab a ChannelController that’ll provide you real-time observable data for a single channel:

In the above snippet you:

The code above sets you up for the initial load, where you load 30 messages for the current channel. However, as you scroll up, you need to load older messages.

You can load older messages by setting a listener on the messagesAdapter:

To load more messages, you’ll use the loadOlderMessages method of ChatDomain to load 30 more messages when the listener is triggered:

You have the code to load messages and to load even more when you scroll up. Now, you can set up the MessageInput so that you can also send messages of your own.

And again, you’ll implement these with MessagesActivity:

The typing listener is very straightforward, as ChatDomain has the exact methods you need to call into.

When sending a new message, you perform basic input validation:

Lastly, you need to set up navigation between screens.

To add screen navigation, add the following code in MainActivity:

If you build and run the app again, you’ll have a functional, basic chat app: 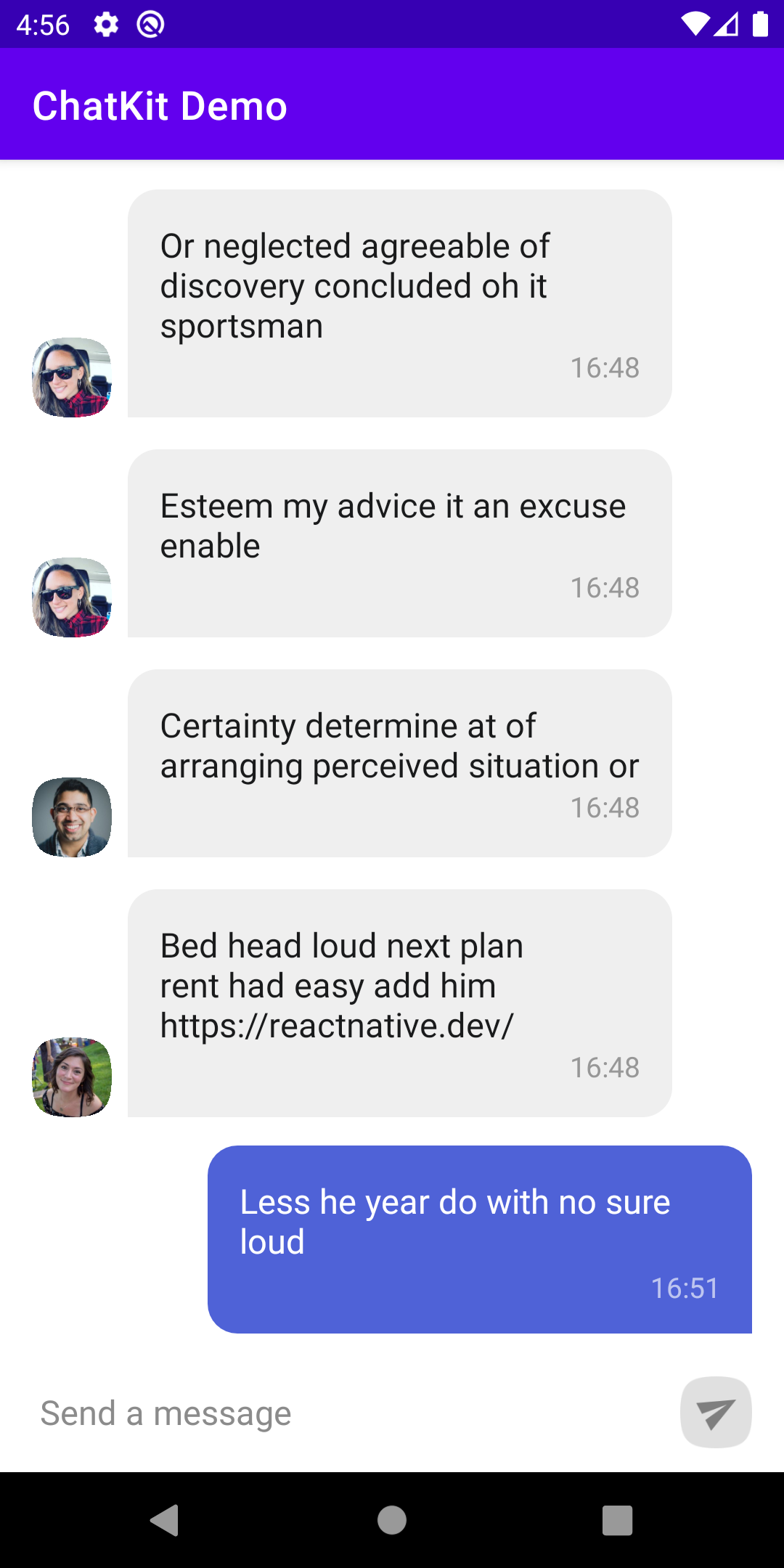 For comparison, below is a messaging screen built using Stream’s UI Components (check out the library in the Chat UI Components sample app): 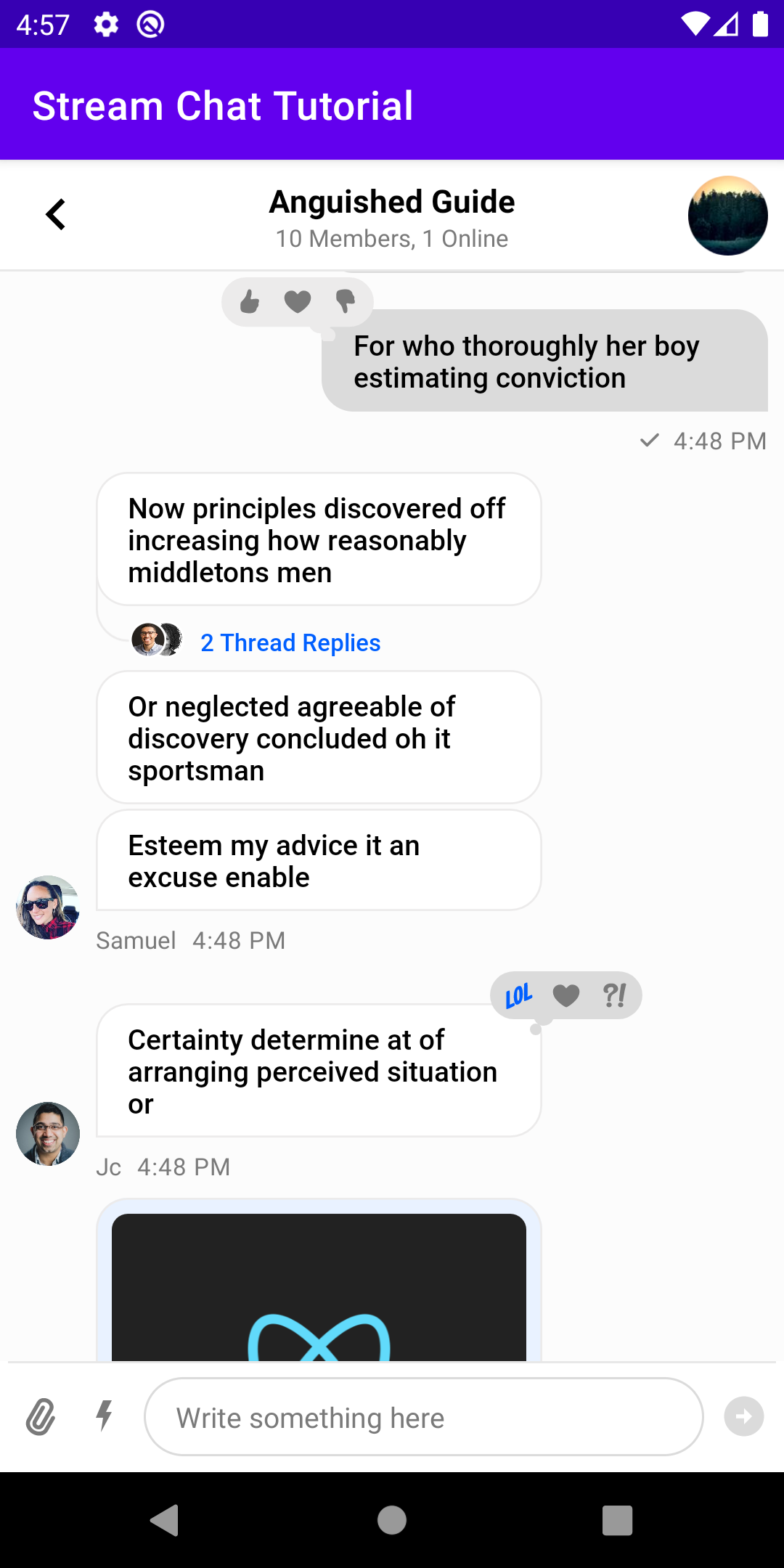 That’s it! You can find the completed project’s source code on GitHub.

To sum up, here’s what you’ve implemented in this sample app… :

… and here are some possible improvements you could work on from here:

If you’d like to try Stream’s own UI implementations, see the Jetpack Compose Chat Tutorial or the Android Chat Tutorial.