Invite Only Chat with Laravel and Vue

Group chat can get a bit messy, especially if it’s public and anyone can join. Making a group chat invite-only can help manage the content of the group and the sanity of those in it, in addition to preventing spam users and bots.

In this tutorial, we’ll be building an invite-only chat room where only admin users can invite other users to join a chat room. Upon joining the chat room, users will be able to chat with other users in realtime.

The complete code for this tutorial is available on GitHub.

To complete this tutorial, you'll need the following tech:

To follow along with this tutorial, a basic understanding of Laravel, Vue.js, and JavaScript would also be helpful.

Getting Our Stream Chat Keys

To use Stream Chat in our app, we need to grab our Stream Chat API keys. Stream Chat allows you to build a fully-functional chat app in hours, instead of weeks, or even months; we'll use it to build our simple example app in minutes! To get started log in to Stream or create an account. Upon successfully entering your credentials, you'll be delivered to your dashboard, where you can create a new app by clicking the Create App button: 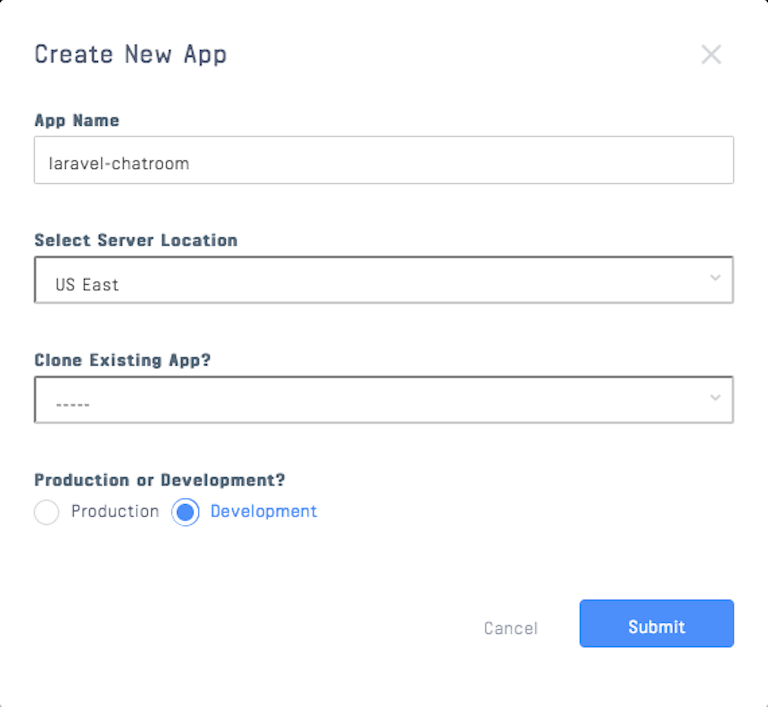 Once that is done, you should see an API KEY and SECRET for your newly created application:

Take note of these keys as we’ll be needing them shortly.

Now, we can begin building out our application!

We’ll start by updating the users table migration in our create_users_table.php file, within database/migrations, as shown below:

We updated the name field to username and added a new field called is_admin, which will be used to determine if a user is an admin or not.

Let’s update the fillable fields in our User.php file, in the app directory, to have the username field instead, as well:

Next, we’ll create an Invite model:

In addition to creating an Invite model, the command above will create a migration, as well as a controller for the model.

Open up the created migration and update the up method in the create_invites_table.php file, within database/migrations, as shown below:

The fields are pretty straightforward; the accepted field will be used to determine if an invite has been accepted or not.

Also, let’s mark the fields as fillable in Invite.php, in the app directory:

Before we run the migration, let’s set up our database. For the purpose of this tutorial, we’ll be using SQLite. Update DB_CONNECTION inside .env as below:

Because we are making use of SQLite, we can get rid of the other DB environment variables.

By default, Laravel will look for a database.sqlite file, so let’s create it:

Now, we can run the migration:

Before we move on to adding functionality to our application, let’s add our Stream keys to our .env file:

Now, let’s start building the group chat functionality. We’ll start by creating a new channel, which we’ll call "Chatroom", and an admin user, to administer the group. We’ll be creating a console command to handle these. Run the command below to create a new console command:

Since we’ll be making use of the Stream Chat PHP SDK, let’s install it:

With that installed, open up InitializeChannel.php, located at app/Console/Commands, and replace the contents with the following:

Now, we can run the channel:init command:

Since we want users to join our group chat only by invitation, let’s remove the ability to register, which was added by Laravel authentication scaffolding. We can do that by updating web.php, in the routes directory, with the below:

With the channel and admin users created, let’s add the functionality to invite users to our group chat. We’ll start by creating the routes. Add the code below inside web.php:

Since we already have InviteController.php, let’s open it up and add the following code in it:

Next, let’s create the view file. Inside the resources/views directory, create a new invites directory and create a create.blade.php file inside it, then paste the following code in it:

The form has just one field, which is for capturing the email address to send an invitation to. Above the form, we have in place to display flash messages, if there are any:

Let’s move on to adding the implementation for processing the form. Add the following code to the top of InviteController.php:

For this tutorial, we won’t be setting up a mail driver. Instead, we’ll log the mail to a file. Let’s set the MAIL_MAILER to "log" inside .env as shown below:

Now, if we try sending an invite, it should be logged inside storage/logs/laravel.log and look something like the below:

Let’s add a link to access the invite users page. We’ll add it in the navbar (app.blade.php) immediately after the @else:

While we are here, let’s update the navbar to show the user’s username instead of the name:

With these changes, your navbar should look like the below:

Once a user is sent an invitation, the user can click on the link in the email to join the group chat. To make this possible, add the following code inside web.php:

Next, add the following code inside InviteController.php:

First, we retrieve the invite matching the token, if it exists. If the invitation has been accepted, we simply redirect the user to the home route. Otherwise, we render the "register" view and pass along the invite.

The register view is already in place; we just need to update it slightly. Replace the name and email fields in resources/views/auth/register.blade.php as below:

We made the email field read-only and set the value to the email address on the invite.

We’ll still make use of the default Laravel RegisterController, at app/Http/Controllers/Auth/, to handle registration. Open it up and update validator and create methods to make use of username instead of name like below:

Still inside RegisterController.php, add the following code to the very top:

Once a user registers successfully, the registered method is called. Inside this method is the perfect place to mark the invite as accepted, create the user on Stream, and, finally, add the user to the "Chatroom" channel.

Let’s add the functionality for generating an authentication token, which Stream Chat will use to authenticate a user.

and add the following to it:

This generates a token using the user’s username as the ID.

With the backend functionality in place, let’s move on to adding the chat functionality. We are going to rename ExampleComponent.vue, inside the resource/js directory, to "ChatRoom.vue" and update its reference inside resources/js/app.js as below:

Now, replace the content of the ChatRoom component with the following:

The template is made up of two parts: the members list and the chat itself. We generate a token for the authenticated user, then we use the token to instantiate the Stream Chat client. We also initialize the channel and watch for activities on the channel, which allows us to know when a new message is sent on the channel as well when new users join the channel. Lastly, we have the functionality for sending a new message.

For a guide that covers these in detail, check out my previous tutorial.

Next, let’s make use of the ChatRoom component. Update home.blade.php as shown below:

The ChatRoom component accepts the authenticated user as props, which we are passing in.

Remember we said only an admin user can invite users to join our chatroom? But, as it stands, anybody can do this, even if they're not logged in. Let’s change that! Laravel provides an Authenticate middleware, by default, which we can use to enforce access to only authenticated users. We’ll create another middleware for enforcing an authenticated user is an admin.

Run the command below to create an Admin middleware:

and update the handle method as shown below:

Here, we are simply redirecting the authenticated user to the home route if the user is not an admin. If they are an admin, we allow the user to access the requested page.

Before we can make use of the middleware, we need to register it. We’ll register it as a route middleware by adding it inside the $routeMiddleware array, in app/Http/Kernel.php, like so:

Now, we can make use of the middleware inside web.php using the admin key/identifier:

Now, not only does a user have to be authenticated to access these routes, but they must also be an admin!

In this tutorial, we have seen how to build an invite-only group chat using Laravel, Vue.js, and Stream Chat. We created multiple pages and authentication layers to our simple chat, but there is so much more you can do! To learn more about Stream Chat and its exciting features, check out the docs!