For version 3.x of the Stream Chat React Native SDK, we focused on improving the speed and performance of our UI components to create a fast and responsive chat experience for the end user. Some of the key changes we made include, changes to the architecture of the SDK to provide better performance and improved

To make these improvements, we made major architectural changes to the SDK. Because of this, upgrading will require some additional work. This page will walk you through the steps involved in upgrading the React Native SDK for Stream Chat from version 2 to version 3.

Before you begin the upgrade, we recommend commenting-out all Stream Chat SDK v2 props related to theming and custom components for ChannelList, Channel, MessageList and MessageInput in your application. This this will let you test the setup for the upgrade independently from customizations.

Stream Chat v3 includes new peer-dependencies for the package. You can use this script to install the dependencies:

After adding these dependencies, go through following links and follow any additional installation steps:

If you are using expo, the please install the corresponding dependencies instead.

And deleting the import statement for react-native-get-random-values from your root (index.js/index.ts) file:

v3 requires you to import the gesture handler dependency at the top of your application's entry file (usually your App.js or index.js) before any other dependencies:

v2 of SDK used Styled Components for theming purpose, which we have abandoned in v3 in favor of using the default approach for React Native style sheets. We've published a separate guide for how to apply custom theme on chat components.

At this point if you launch the application, it should be working fine (assuming all the component customizations have been commented out) 🎉.

Message UI is the most common use-case for customization. In v2 of the library, you could provide a Message prop to MessageList component to customize message UI. But in v3, you need to provide MessageSimple prop on the Channel component instead.

Moving from prop drilling to context#

As part of v3, we have tried to get rid of prop drilling pattern as much as possible. We are moving towards using React's context based architecture.

Let's take an example from v2 documentation which shows how to render message sender's name at bottom of the message:

Additionally you have access to all the required values through contexts (props.message in this example). Please check documentation of contexts for all the available contexts.

In v2 of the library, message actions such as "Copy Message" or "Edit Message" etc, were rendered in ActionSheet. In v3 of the library these actions get rendered within the overlay when a user long-presses the message. Also, we have provided finer control over customizing these actions according to your use case. Please take a look at guide for customizing message actions for reference.

Rendering of reactions on message and reaction picker has changed as part of v3. There three major differences in reactions related UX.

Please check the guide on Message with custom reactions for details. 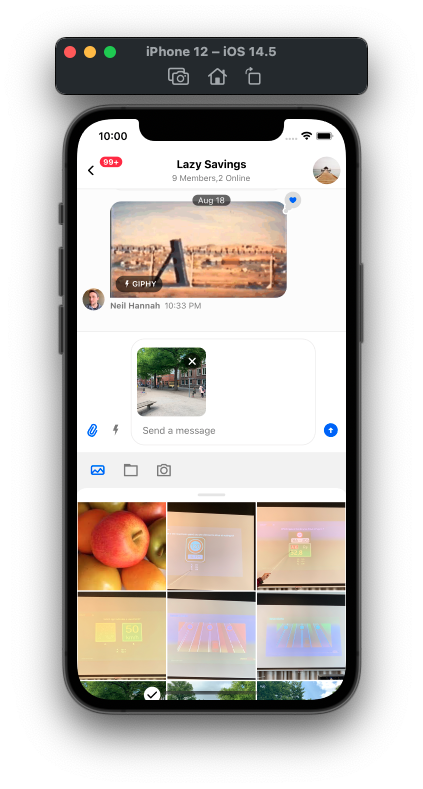 Its possible to use ActionSheet based attachment picker (similar to v2 implementation). Please check the docs on implementation of native image picker

Did you find this page helpful?