The core of Stream Chat for React Native is it's ability to be customized to your needs. Many developers find that simply altering the theme is enough to achieve their desired results. But if more modification is needed, or functionality beyond what is provided out of the box is desired, creating a custom component is likely the best course of action.

When to use a custom component#

Changes to content beyond these tweaks will require custom components. If your goal is simply to remove a UI feature you can always replace the component with one that returns null to achieve this, i.e. () => null.

How to use a custom component#

Most custom components are provided to the UI as props on the Channel component. The OverlayProvider, MessageList, and ChannelList have a few exceptions to this rule, but Channel is the primary entry point.

Let's say you want to remove the fixed DateHeader on the message list. Create a component that returns null and pass it in as out DateHeader on Channel. 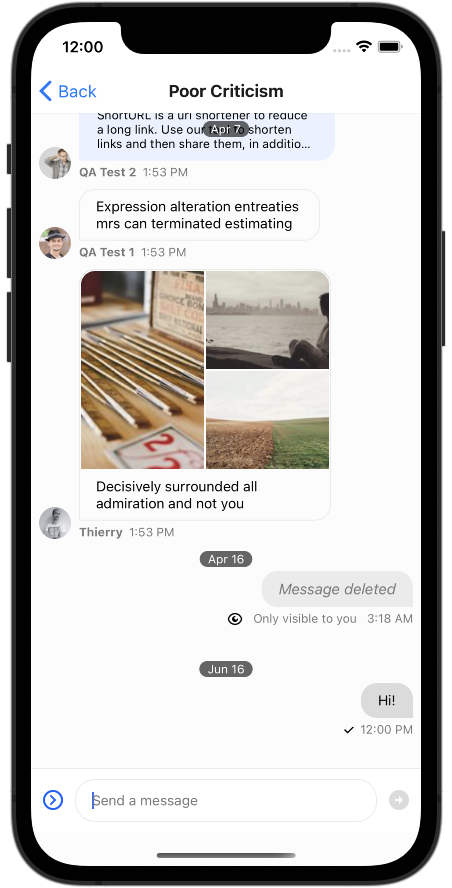 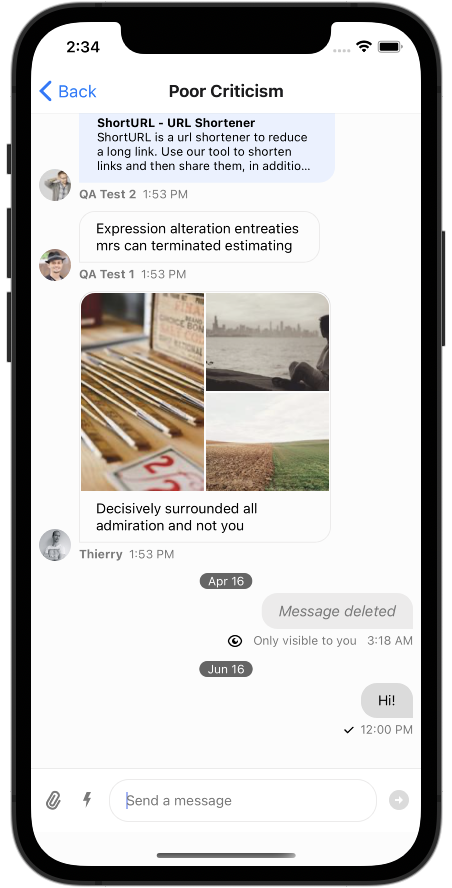 At the core of creating custom components is the ability to access pertinent data from the contexts Stream Chat for React Native provides. The hooks provided allow you to access this contextual information easily throughout your application. Keep in mind when developing that these hooks are only usable within the scope of their context providers. Certain contexts, such at MessageContext, are only available within the scope of a single Message so you cannot use this hook in for instance the DateHeader.

To demonstrate this usage the DateHeader can be replaced with a component that makes use of context. Messages can be pulled from the PaginatedMessageListContext and the name of the last sender from the list can be retrieved and displayed in place of the DateHeader. 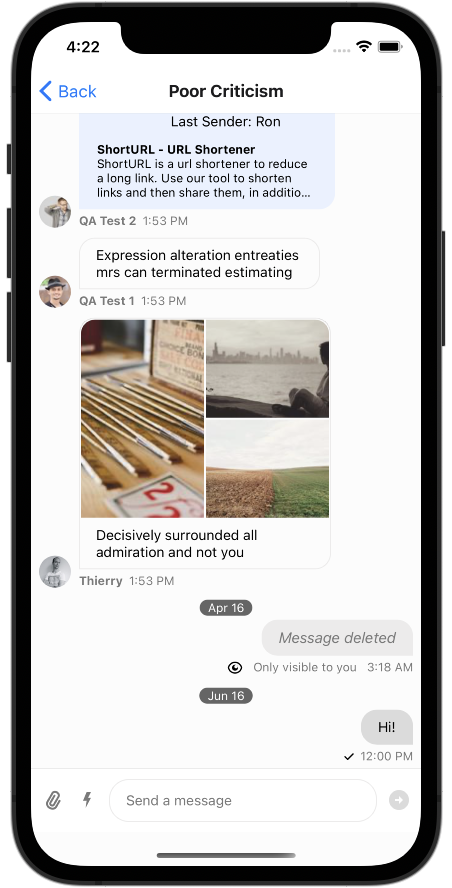 This allows you as a developer to not only customize the look and feel of every part of the UI, but also decide what information is shown where based on your own design.

Custom components within a Message should draw from mostly static contexts with the exception of their own MessageContext. ThemeContext, MessagesContext, and TranslationContext all remain static with few exceptions and can be used.

This should be done as memoization of a value from a context surrounding the FlatList from a component within the FlatList does not work properly when the context updates. Pulling directly from the PaginatedMessageListContext within a Message for instance would cause every Message to re-render to some degree when the message list updates.

If a value in a context updates all components accessing values from that context will re-render, even if the values they are accessing have not changed. Many of the out of the box components use memoization with custom areEqual checks to ensure components are only being re-rendered when necessary. Values from context are passed through the memoization as props and the necessity to re-render is then determined. This is most important inside of messages where the largest performance hit would be noticeable as an update that re-renders every message is computationally expensive.

When creating custom components it is suggested that developers take the same performance considerations to ensure the user experience is not degraded. Adding a console log to a custom DateHeader component that is accessing the PaginatedMessageListContext a large number of re-renders can be seen when the channel mounts, and re-renders continue when interacting with messages, such as reacting to one.

It is import to consider equality when writing areEqual checks. Trying to compare two functions, objects, or arrays during a re-render cycle, unless they are themselves memoized or in another way referentially stable, will fail a shallow comparison. For this reason in the out of the box components it is often considered when the component should re-render, and the equality checks are created based on that logic.

In the out of the box MessageFooter, message from the MessageContext is used, but message is an object and not referentially stable. Checking to see if prevMessage === nextMessage will return false whenever the MessageContext updates. Instead the usage of message in the component is considered, for the MessageFooter data such as replies is not import, so a custom equality value is created for the check.

This custom value is then used to determine if the MessageFooter should re-render as it takes into consideration if data relevant to the component has updated. When creating custom areEqual checks this approach should be used to ensure the custom memoization is having a meaningful effect on performance and preventing undesired re-renders.

Did you find this page helpful?